This was only released in Japan for the NES, MSX, and FM Towns.

Gorby's Pipeline plays like a cross between Pipe Dream and Tetris, with the player tasked with connecting water flowing from a pipe on the right side of the screen to one of the pipes on the left side of the screen. This is done by dropping and rotating blocks that consist of two "pipe pieces", which can either be straight or a bend. A pipe piece needs to have a block directly underneath it, otherwise it will fall until it is supported (meaning that blocks can split), during which time it can be rotated again. Water runs in the path created by the linking of blocks, similar to Pipe Dream.

The titular character Gorby is the nickname of the USSR's President at the time, Mikhail Gorbachev. As odd as it is to have a political figure star in a video game, this was actually done as a political propaganda tool. The Japanese government was trying to improve relations between Japan and the USSR. The pipes can be symbolism for establishing a pipeline between to two counties. Russia's oil was a big reason for both the propaganda and choice of a pipe game. Japan requested and was approved by the Soviet government to use the likeness of Gorbachev. 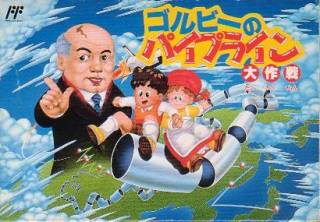