A turn-based RPG based on Japanese folklore. A pair of monks complete their training only to find themselves embroiled with the fate of the country.

Shinsenden (lit: "Biographies of Divine Transcendents", the Shinsenden is a holy book of the Taoism religion) is an RPG from Tamtex and Irem for the Famicom and features an Eastern mysticism setting with monks and creatures from Chinese/Japanese folklore. The story of the game concerns a monk that goes training with his partner, Raichi, and discovers an injured time-traveller which eventually leads to Raichi getting abducted and the hero chasing after her kidnappers.

The game is a traditional Japanese RPG with a turn-based combat system and equipment management. The player's party switches around as they progress, as various members join or leave depending on the story. While the game was never officially localized it did receive a fan translation in 2009. 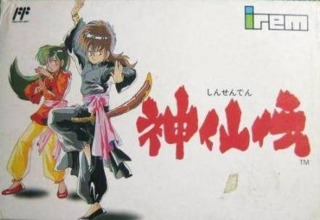