A fantasy sports game developed by Golden Goblins that is based on a fictional "Grand Monster Slam" tournament in the fantasy world GhoLD.

The game was developed and published in 1989 by Golden Goblins, a label of the German company Rainbow Arts. It was released for the Amiga, Atari ST, Commodore 64 and PC. Later re-releases were done in Europe by Top-Shots and EDOS and in the USA by ISC. The PC version supports CGA, VGA and Hercules video modes.

The soundtrack to the game was done by Chris Hülsbeck and the source code of the game became available via the Internet Archive in March 2017.

Grand Monster Slam is based on a fictional tournament in the fantasy world GhoLD and it's gameplay is heavily based on the 1985 arcade game Penguin-Kun Wars by UPL. The participants of the Grand Monster Slam are taken from common fantasy races, including trolls, dragons, orcs, ogres and goblins. The player assumes the role of an unnamed dwarf. In the final, the player encounters a golden goblin called Winner, who is based on the company logo of the developer Golden Goblins. The original release also included two pewter figurines of the golden goblin Winner in the game box.

The biggest sporting event of the fantasy world of GhoLD, the Grand Slam, was born from a war between the humans and the goblins. The goblins besieged a desert fortress of the humans and both parties fired at each other with stones from catapults. This took three years until the war-weary parties could finally agree on a peace treaty. In remembrance of this historical event in the desert it was agreed to meet each other again every three years in order to exchange some honorable catapult shots as part of a big festival. The other races also found this peace-festival great and wanted to participate in the catapult shooting. After some incidents at the catapult shooting, in which now almost every race in the fantasy world GhoLD participated, it was time for some rule changes.

A special arena had been build, the catapults were abolished, a tournament system was introduced and the "Grand Slam"-games were hold now every five years. The most significant modification of the game was the introduction of the Beloms(small furry creatures). Instead of shooting or throwing stones at each other, only the best of each race compete against each other with the aim to kick all one's Beloms over to the opposite side.

This year, everybody's attention is attracted by the dwarves, who participate in the games for the first time. One can hear rumors of the champion of the dwarven as being a legendary hero, and also the king of all the proud dwarves clans is expected as a visitor to the games. So it is no surprise that the newcomer is a player controlled Dwarf whos aim is to rise up into the top class of Grand Slammers - or even achieve the title.

At the begining of the game the player can select in the main menu the current "Hall of Fame" to see the high scores. With "Faulton Feeding" and "Revenge of the Beloms" the two mini games can be trained. "Grand Monster Slam Main Tournament" starts the actual game.

The players character The Dwarf is placed in the foreground, and each of his opponents plays in the background. In front of each player is a baseline with six Beloms lined up on it. The Beloms are brown, spherical ball-like creatures with faces, which tremble as the player approaches them. The players task is to kick all his own Beloms across the playing field to the opponent and make his "homerun", which means running across the playing field to the opponent's baseline. The Beloms can be kicked up the field in one of three directions and at a stregth determined by the fire button. It's also important to avoid the opponent's Beloms and to hit the opponent with his own Beloms as often as possible. In case of a player being hit, he remains lying on the ground for a certain amount of time which gives the other player the opportunity to kick as many Beloms as possible to the other side.

The playing field is separated from the audience by a low wall. If a Belom is kicked over the wall into the audience , the Belom player receives a so called "Pelvan", the penalty in the Grand Monster Slam. A duck-like Pelvan creature sinks down a rope to the playing field and places itself on the pelvans-point ("P") of the executing player. The penalty-taker then kicks the Pelvan creature, and the other must move to try to save it. If the penalty-taker converts the shot then three Beloms move over to the opponents side, otherwise one Belom moves back to the side of the penalty-taker. The penalty can be kicked straight forward, angled to the right, or angled to the left and the receiver can move in the same directions, so any Pelvan has a one-in-three chance of being saved. In order to be awarded a penalty shot the opposite fans should be irritated with the so called "vituperations" which are done by pulling down the joystick and pressing fire. This will make the opponent more and more nervous and at some point he will kick a Belom over the wall into the audience.

The "Grand Monster Slam Tournament" consists of two leagues and an final round. The player starts the game in the 1st league in which only beginners or fighters who have been disqualified in the last games compete. It is a knockout tournament with 8 players, who fight each other in pairs. The winners of the first match form the pairs of the second fight so that finally only 2 players are left at the end of the second match. These two will then fight in the final in order to decide who is the winner of the first league.

After every won match the player has to participate in an intermediate mini-game called "Revenge of the Beloms". The winner of the whole league must also pass a qualification, an event which is called "The Remarkable Six Faultons". Anybody who fails in this qualification cannot ascend to the higher league with the next group of competitors.

The opponents in the 1st league:

The 2nd league also consists of 8 players, and again there is an knockout tournament in order to find out the next league winner. The participants of this league are veterans with considerable experience and the playing field is now separated by a waist high wall with a gap in the middle, thus making the game more difficult. Since the height of the shot is determined by the duration of the "fire button pressing" it takes more time to get the Beloms over the wall from the sides of the baseline. Effective and fast shots are only possible from the middle of the baseline when the Beloms get throught the gap in the wall and hit the opponent. Also the homerun can not be started from any point on the baseline. The playing character has now to be moved up to the middle of the baseline in order to start the run through the gap in the wall.

Also in the 2nd league the mini-games("Revenge of the Beloms" after every won match and the "The Remarkable Six Faultons" as qualification to get to the final round) have to be completed, which are a bit more difficult this time.

The opponents in the 2nd league:

The winner of the 2nd league joins the final round, there meeting only three players - the winners of the last 3 Grand Slam-tournaments. The opponents have to be beaten one after the other in order to finally obtain the yellow shirt and the golden metal. All three opponents are hard to beat and have magical powers which they use variably.

The opponents in the final round: 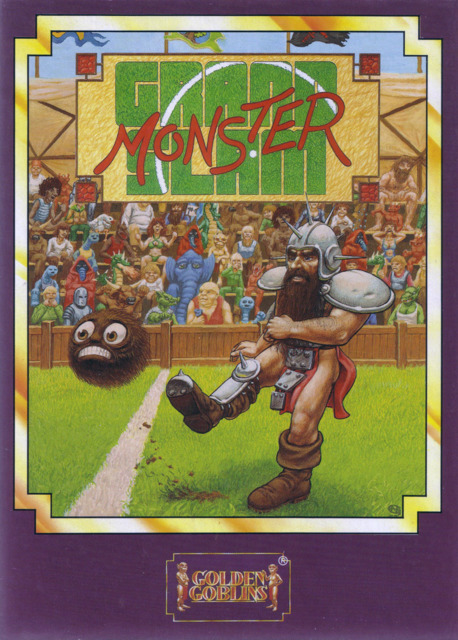