Torneko no Daibouken: Fushigi no Dungeon

Torneko no Daibouken: Fushigi no Dungeon ("Torneko's Great Adventure: Mystery Dungeon") is a role-playing game developed and published by Chunsoft for the Super Famicom platform. It is the first game in Chunsoft's Mystery Dungeon series of Roguelike dungeon crawlers, which would frequently cross over with other RPG series (such as Pokemon).

Torneko Taloon is a character introduced in Dragon Quest IV. He's notable for not being a traditional "hero": rather than a chosen youth, he's an overweight travelling merchant with a doting family and an uncanny knack for finding valuable items after fighting monsters, which he then resells at exorbitant prices at his store. Torneko no Daibouken continues his avaricious adventures, delving into a procedurally-generated dungeon to look for more treasure. 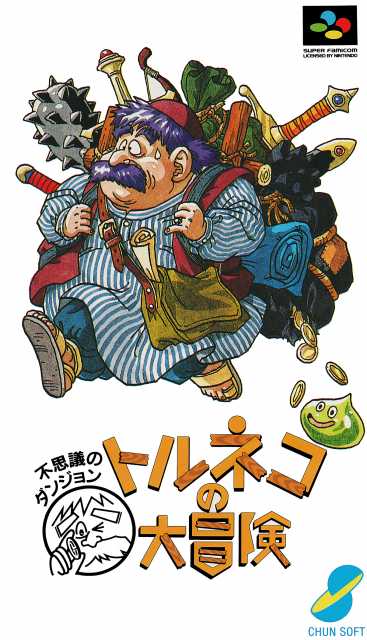