Scrolling brawler with RPG attributes. Fight through street gangs as Alex and Ryan in search of Ryan's kidnapped girlfriend. This game was basically an early proto-GTA sandbox brawler, where the player can explore the city, beat up or steal from random people, and shop around.
Game Boy Advance

Released in April 1989 as Downtown Nekketsu Monogatari, River City Ransom is the third game in Technos' Kunio-kun series. The game was a departure from previous brawlers with its introduction of RPG elements, open world exploration, and sandbox gameplay, anticipating later sandbox games like Grand Theft Auto.

In Ransom, the player takes control of Alex (Kunio) and Ryan (Riki), who must cross River City to reach gang leader "Slick" barricaded inside River CIty High. Gameplay is in the style of classic side-scrolling brawlers, namely Double Dragon and Technos' own Renegade, released the year before. Unique to River CIty Ransom is the ability to collect money from defeated enemies and spend it at shops to regain health or boost RPG-style stats. The player learns new moves and increases their fighting prowess through this system. The game's quirky style of comedy also sets it apart from similar titles - and it could almost be considered a parody of them.

Players choose to control Alex or Ryan (or both in two-player co-operative). Both characters have identical skills, and differ only in appearance. The A button will punch, the B button will kick, and both pressed together will jump. Punches are faster while kicks have longer range, and the two attacks can be improved separately through use of purchased items.

Two-player mode features both players on screen at the same time. Players can even do certain co-op moves together, including picking up the other player and throwing him into enemies. In nearly all versions, two-player comes with an A and a B mode. In A mode, players can damage each other with their strikes. In B mode, they cannot.

As with other brawlers, various weapons can be picked up from within the environment or taken off stunned foes. Weapons include pipes, chains, knuckle dusters, garbage cans, and even enemies that have been knocked down. Bashing an enemy overhand with the body of another enemy is part of the game's goofy humor. When holding weapons, the A button strikes with that weapon and B throws it directly forward.

River City has seven major areas, most based around shopping centers. There is no overworld map, but players can freely return to previous areas by retracing their steps. Major areas often lead to smaller areas by pressing "Up" in front of alleyways in the background art. These smaller areas act as arenas for the game's bosses, who appear when specific conditions are met. The exception is the final area, River City High, which is made up of three floors plus a final battle on the roof.

Shopping malls feature stores in the background, which can be entered by pressing "Up" in front of their doors. Money collected off defeated foes can be spent in the shops. Players can buy food, drinks, and medicine to refill health and boost stats. More than one "serving" of an item can be bought, and more expensive items will always have a larger effect. Most foods are eaten immediately inside the shop, but some can be ordered "to go" - allowing them to be taken along and used within the world from the inventory screen.

Aside from food items, shops will sell books and shoes. Comic books and magazines will boost stats, while certain special books teach new attacks. The "Stone Hands" book, for example, upgrades the player's standard punch to a quick succession of three (for three times the damage). The "Dragon Feet" book does the same for kicks. Naturally, these books are very expensive. Shoes boost a combination of kicking power and agility, and are equipped from the inventory screen. They bestow their effects for as long as they are worn.

Each area in River City is controlled by one of nine different gangs, who increase in difficulty as the player goes along. Gang-appropriate names are reused for each member the player fights (ex: Biff, Trip, and Tyler for the "Frat Guys" gang), and each gang is easily distinguished by their unique colors. Gangs have different stats and tendencies (Cowboys like to double-team, Jocks favor using weapons), and also drop different amounts of cash for each member's defeat (from $.50 per defeated member up to $1.25 with the toughest gang).

Bosses also feature prominently, and generally appear in specific areas after the player has beaten up enough of their gang. Bosses take a lot of punishment and dish it out as well, and feature different strategies (similar to their gang) along with occasional unique moves. There are eight boss fights around River City that must be discovered and won before the player is allowed entry into River City High. From there, five more boss fights must be won inside the school, including taking down the mastermind Slick.

Aside from the stats, another RPG aspect is a limited inclusion of dialogue. Some characters can be spoken to instead of fought with, and bosses will often provide clues. Dialogue runs along the bottom of the screen, and ranges from taunts to enemy groans when defeated (including the notorious "BARF!"). Status messages are also updated here, notifying the player when they collect money and when entering a new area. The options screen changes the speed at which these messages are displayed and cleared.

Progress is saved with a password system, storing only the player's stats. Money earned and bosses defeated are not saved, so the player must start over each time, though with a much stronger character. The password is updated as the game is played, and viewable from the menu screen.

As with the previous two games in the series, most of the changes for the Western release involved alterations to the Japanese idea of high-school rivalries (which is not the same in the West). Kunio and Riki were renamed to Alex and Ryan, and all characters' high school uniforms were changed to generic street clothes - making the enemies affiliated more to urban gangs than rival schools.

The first port of Downtown Nekketsu Monogatari was released in April, 1990 for the Sharp X68000, a Japanese home computer popular for its mostly identical arcade ports. This version features sharper graphics and somewhat smoother gameplay compared to the Famicom version, as well as more enemies on screen at once (three at a time is now standard, instead of two at a time on the Famicom). The X68000 version also adds new areas to River CIty, giving each gang their own high school and expanding the roster of bosses (who must all still be defeated to enter River City HIgh).

In December, 1993, Naxat released a version in Japan for the PC Engine Super CD-ROM. This edition features redrawn backgrounds, a redbook audio soundtrack, and spoken dialogue for Kunio, Riki, and the shop owners. Sound effects were not updated similarly, and gang members' defeated lines are not voiced. This version also does not include the expanded areas and new bosses from the X68000 version. The PC Engine port is considered rare, and sought after by collectors.

The third port was for the Game Boy Advance handheld, and titled River City Ransom EX. This version features further redrawn graphics, a variety of customizable options, seven new schools/gangs, and a battery backup save system instead of passwords. This port also features a recruit system, where players can gain up to three artificial intelligence partners to fight along with them. Players must keep up a certain reputation to avoid losing these followers (such as defeating lots of enemies and keeping their allies alive). However, this port does not feature two-player co-op, and the A.I. system may be a concession to this.

The original Famicom version was also released for download to the Wii Virtual Console. River City Ransom EX was made available to customers of certain mobile phone carriers.

The Japanese version was quite popular, and encouraged Technos to continue the Kunio-Kun series with seven more titles. Many of these were sports-related, with the same high-school rivalries and cartoonish sprites. The game was noticeably less successful in Western markets, and none of the Kunio-kun games after River CIty Ransom were released outside Japan.

Scott Pilgrim vs. The World: The Game shares a lot of intended similarities with River City Ransom. Retro City Rampage is a similar 8-bit style homage. 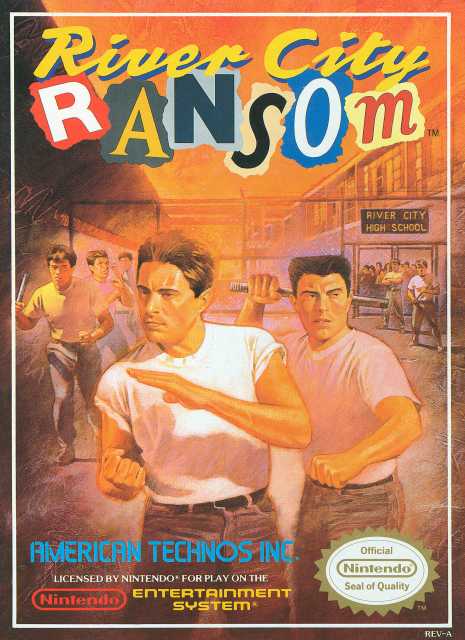