A charming platformer developed by Alpha Denshi for the Neo Geo, as a young insect-human hybrid must journey to rid the peaceful kingdom of Raguy from the evil Daruma Empire.

Blue's Journey (known in Japan as Raguy) is a side-scrolling platformer developed and released by Alpha Denshi for arcades (running Neo-Geo MVS hardware) on March 14, 1991. It was also released for the Neo Geo AES for all regions during their respective launch dates.

Players control Blue, a young Insectarian (human beings with insect-like features) from the fantasy kingdom of Raguy. When the evil Daruma Empire invades the world (consuming and polluting the kingdom), it's up to Blue (and his unnamed green companion, guided by the second player) to put an end to Emperor Daruma and restore the kingdom.

Along with numerous weapons at his disposal (including leaf gusts, acorn bombs, and pincer boomerangs) and multiple ways of disposing of his enemies (usually by jumping on them to spin them away, or by stunning them and throwing them at other enemies), Blue can shrink at-will to move faster and reach special narrow areas (at the cost of being able to attack). The game also features multiple paths, multiple endings, and a currency system (flowers).

It was later ported to the Neo Geo CD on October 31, 1994, released exclusively in Japan. 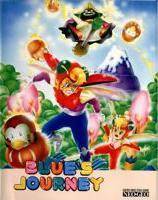