Castlevania (known in Japan as Akumajou Dracula, which is loosely translated to "Devil's Castle Dracula") is a 2D horror-fantasy action platformer developed and published by Konami for the Famicom Disk System in Japan on September 26, 1986. It was later released for the Nintendo Entertainment System in North America (on May 1, 1987), Europe (on December 19, 1988), and Japan (on February 5, 1993).

Inspired by classic horror cinema, Castlevania tells the tale of vampire hunter Simon Belmont, heir to the mighty Vampire Killer whip, as he must venture through a decrepit and unholy castle in the year 1691 to destroy the evil Count Dracula. The story of the Belmont clan, the Vampire Killer whip, and Dracula's countless resurrections have been further developed by the game's numerous sequels and spin-offs.

The game sets the standard for the "traditional" Castlevania platformer, with Simon's primary weapon being his leather whip (which can be upgraded to a flail-style chain whip) that can only be swung horizontally. He also has a variety of throwable sub-weapons at his disposal (including daggers and axes), which are replenished with Heart-shaped tokens (which, despite common video game logic, cannot heal him).

During the late '80s and early '90s, the game received numerous ports to computer systems and arcade hardware, as well as multiple remakes (including Vampire Killer, Haunted Castle, Super Castlevania IV, and Castlevania Chronicles). It was also included in multiple compilations, as well as the NES Classic Edition micro-console in 2016.

Simon's primary weapon is the Vampire Killer, which starts as a short-range leather whip. It can be upgraded to a flail-style chain whip with increased damage by collecting a whip power-up. The chain whip can be further upgraded by collecting a second power-up to extend its range. Simon can only crack his whip straight ahead to attack enemies with it; however, he can whip while jumping to strike at mid-air targets.

By collecting Hearts, Simon can use one of five sub-weapons that can be found by whipping candles or as item drops from defeated enemies. The Dagger is extremely weak, slow, and is more of a hindrance than a help. The Axe is thrown in an upward arc, useful for taking out enemies hiding or flying above Simon. The Holy Water is a short-range "firebomb" that can stop enemies in their tracks while doing constant damage. The Cross is a boomerang that covers the entire distance of the screen when thrown. Lastly, the Stopwatch stops all regular enemies in their tracks at a cost of five hearts. All the weapons but the Stopwatch can also be upgraded to a double and triple shot, allowing multiple uses of the weapon at the same time.

This initial incarnation of Simon also set a standard of stiff movement for Castlevania protagonists. Simon moves at a fixed pace and cannot change his direction in mid-air after a jump. His slow speed is further reduced while climbing stairs, which can leave Simon extremely vulnerable to projectiles or fast-moving enemies. There is a slight delay during jumps between the button press and the corresponding on-screen action; this delay forces the player to be very deliberate while jumping because it requires a particular timing. The restrictive nature of Simon's jump was changed in the Super Castlevania IV remake, allowing players to alter Simon's direction while in mid-air.

In February 5, 1993, the NES version was released in Japan (prior to that, it had only been released on the FDS), sacrificing the saving and name registration for a new "Easy" mode, which gives Simon more time, damage protection, lives, and knockback protection from being damaged.

Shortly after the original release, the game was adapted for use in Nintendo's PlayChoice-10 and Vs. arcade systems, with the latter including multiplayer (where players alternate after each life). It was also ported to the Game Boy Advance by Nintendo on October 25, 2004 as part of the Classic NES Series and released on the PC in November 15, 2002 as a compilation of NES Castlevania and Contra games (dubbed Konami Collector's Series: Castlevania & Contra). The game was later digitally re-released as a Virtual Console title for the Wii (in 2007), the Nintendo 3DS (in 2013), and the Wii U (in 2013-2014). It was also included in the 2016 NES Classic Edition micro-console and was included in the 2019 digital compilation Castlevania Anniversary Collection for the Xbox One, PlayStation 4, Nintendo Switch, and PC.

In the early 1990s, Castlevania was ported to PCs and the Commodore 64 (both by Unlimited Software) as well as the Commodore Amiga (by Novotrade). It was also ported to mobile phones three times, each with improved graphics (one in 2002, one in 2004, and one in 2005).

Castlevania, along with having many ports and re-releases, has also had many recreations spanning a variety of game consoles. While they share the same story (as well as some content), they are considered completely different games due to their inclusion of a variety of new gameplay elements and content. 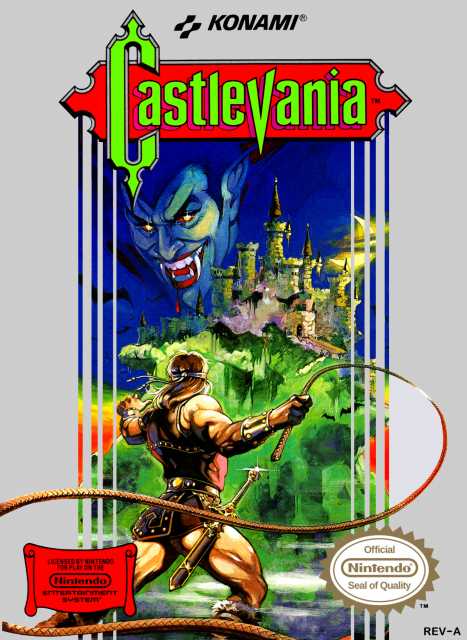