An arcade softball game for the Nintendo Entertainment System. Originally released in Japan as "Softball Tengoku" ( ソフトボール天国 - lit. Softball Heaven), the game is unique in there are no pre-set teams.

Dusty Diamond's All-Star Softball (JP: Softball Tengoku, or "Softball Heaven") is a softball game for the Famicom and NES. The game skews far more towards an "arcade" sports game like Nintendo's Baseball than the more simulation-heavy baseball/softball games on the platform.

A feature that few players would recognize is the Team Building in Dusty Diamond's All-Star Softball. Both players, simultaneously, select characters for their team. As there can be only one of each character used, and the players selecting do not have to take turns, there is a frantic meta-game in simply constructing a roster. One player could take all of the 'good' characters before the other player has even selected one. It's not uncommon for people to create 'house rules' for picking players.

One thing that did not make the transition from the Japanese version to the US version is that all of the Japanese characters were mythical monsters or animals. While the US version has a little creativity with a devil and a witch character, the majority of the characters are nondescript everyday folks. Despite looking normal, all of the characters retain their original stats and powers. That makes it extremely difficult to figure out who is good at what.

In the original version, most players who saw an elephant wouldn't expect him to be extremely quick. When presented with a ninja, a chicken and a sumo wrestler the player has the context clues to work out who'd be good at what (the ninja was quick and throws well, the chicken leaps far and catches well and the sumo wrestler annihilates the ball). While not everyone has a unique skills, there are some worth noting...

While inconvenient, it does offer the occasional reward to the adventurous captain. Finding that diamond in the rough is often an achievement. With 60 characters to choose from, there's no shortage of combinations to try.

While every player has his or her own favorite characters, there are some that are clearly suited for specific roles.

Some rules of thumb make building a team fairly simple; Slow guys at catcher and first base, fast guys in the outfield and don't get greedy with the power hitters... it never works.

If the amount of players wasn't enough content, Dusty Diamond's All Star Softball offers an additional mode over the Japanese version; Fast Pitch vs. Slow Pitch. It's not just the speed of the ball that changes, but the overall rules. Much like real softball, when slow pitch is on teams have four outfielders and runners can no longer steal bases.

Adding further variety to the game is the choice of five fields (Professional makes six fields in the two-player game) each with its own quirks and rules. The Park has a very short homerun line but no fences so outfielders can chase down extremely well hit balls, although misplaying a pop fly can lead to easy points. The School is another field that lacks a proper wall or fence, but if a window is broken the batter is automatically out. The Cliff is enclosed like a regular baseball diamond, but with a picket fence in left field. Hit the ball UNDER the fence for a ground rule double. The Park has water hazards, The Island has trees that can interfere with a throw and the Professional is a no-frills playing surface. 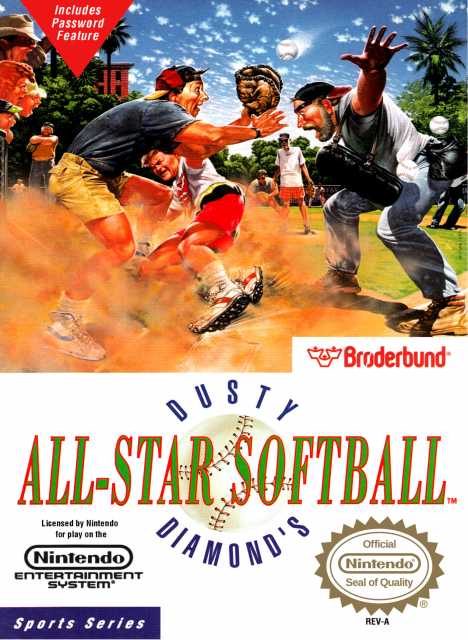