A work of interactive fiction from Infocom, their final game released before being purchased by Activision.

The game designer/programmer (or as Infocom called it, "implementor", or "imp") for Ballyhoo was Jeff O'Neill. Like several other "imps", O'Neill was originally hired as a tester, and then worked his way up to "imp" status. Ballyhoo was his first game as an "imp".

The player plays as a circusgoer who loiters around after the show by "The Traveling Circus That Time Forgot" is over. The circus is well-named... although the "feelies" (see below) describe the performers as living in the 1980s, the circus features phrenology, "miracle cure" patent medicines, and other things one would associate far more with the late 19th century.

The player happens to overhear the circus owner Mr. Munrab reveal to a detective that his daughter has just been kidnapped. (The name "Munrab" is derived from that of history's most famous circus owner, P.T. Barnum, spelled backwards.) The player decides to stick around and attempt to solve the mystery. Naturally, this requires finding clues and interrogating the many colorful circus personalities. It also proves to involve recreating classic circus acts such as tightrope walking and lion taming.

Unlike Infocom's previous mysteries, events aren't scheduled to occur at certain times of day within the game. Instead, the events will "trigger" once the player progresses to certain points in the story. This is a setup more familiar to the modern player, and makes it easier to solve the game without replaying it many times over.

The game has some "meta" moments (somewhat reminiscent of The Hitchhiker's Guide to the Galaxy) where the player is required to converse with the "command line" text parser as if it were a character. O'Neill would explore still more unusual parser interactions in his next game, Nord and Bert Couldn't Make Head or Tail of It.

As had become traditional for Infocom, Ballyhoo's packaging contained collectibles (or, as they were referred to, "feelies") to help set the mood of the game. The game also used elements from the "feelies" as part of its copy protection. Ballyhoo's "feelies" were: 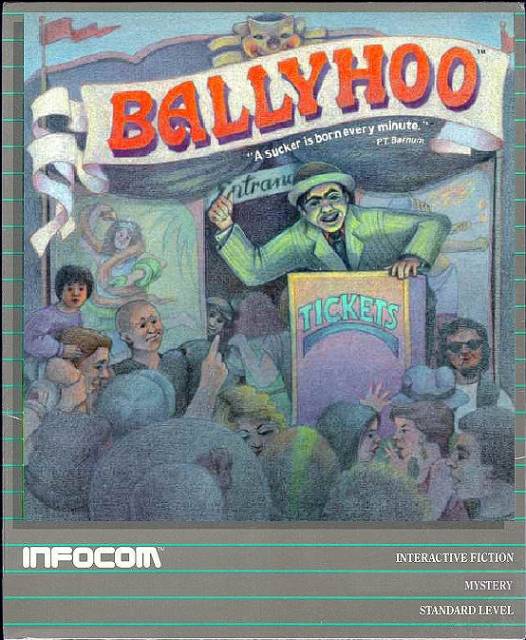