Times of Lore is a top-down RPG that casts the player in the role of an unknown adventurer seeking fame and fortune. Starting out as a story told to children, the player will take this adventurer into a quest that will help save a kingdom.

Times of Lore is a top down, action RPG featuring three character classes, a simple dialogue system, and a seamless world with no load times which was a triumph for the time. A quest to recover three, powerful artifacts is the main focus of the game, although the player is free to explore the land and encounter its dangers without having to follow it.

It's difficulty level, action-oriented gameplay, and simple dialogue made it easy for anyone to get into. It's relative simplicity made it an ideal starting point for newcomers to the RPG genre.

The real-time action of the gameplay was inspired by The Legend of Zelda. In turn, Times of Lore inspired later Ultima games, including Ultima VI and Ultima VII.

The game also has the distinction of being Chris Roberts' (of Wing Commander fame) first title for Origin.

The story of Times of Lore starts with the retelling of an old tale by a Grandfather to his grandchildren...

Long ago, before there ever was a High King, chaos ruled a land divided. It was then that the first of the Elden people arrived along the shore of the Great Sea. At first, the native people of the land attacked the newcomers, seeing them as a threat. After a century of war, the Kingdom of Albareth unified the land and began to prosper. The Elden earned the respect of the people that had once called them enemies and seven hundred years ago, an Elden prince was named the first High King of Albareth with the people's blessing.

He had also brought three powerful relics from the homeland of the Elden: the Tablet of Truth, the Foretelling Stones, and the Golden Medallion of Power. The Tablet allowed the king to answer any question of import to the kingdom and only an Elden of the purest blood were able to call upon it. The Warden of the Southern Marches was found worthy of keeping this great treasure.

The Foretelling Stones enabled the King to see places and times, aiding any who sought its wisdom. These the High King left with the Prior of Marabout, a great monastery built near Rhyder in the far North.

But it was the Medallion of Power that was the most sacred of these three. No High King can hold the throne without it, and its magical essence only recognizes those worthy of the title as a descendant of High King Strebor (Roberts, in reflection). The Medallion allowed the wielder to command entire armies as one force, but its strength was only as strong as the heart of the one who wore it. Therefore, only an Elden with kingly blood could bear it.

Peace reigned until the arrival of the Barbarians from the South. Ganestor was overrun and the armies of Albareth did all they could to break their march. Both armies fought each other for ten long years as High King Valwyn looked for a way to stop the bloodshed.

He then took the best of his forces and confronted the Barbarians in what would become known as the Battle of Ganestor, inflicting terrible losses on the Barbarians whose seemingly endless numbers continued to pour more soldiers into the field. It was a stalemate that neither side could break. The High King finally used the Medallion to pause the battle and parlay with Heidric, the Barbarian leader. Many days passed and at last, a treaty was hammered out.

Ganestor would go to the Barbarians, but in return, they were to swear fealty to the throne of Albareth. The two men grew to respect each other over time and in commemoration of the truce several years later, Valwyn presented Heidric with the Tablet of Truth. Heidric was also named the Warden of Ganestor and peace seemed guaranteed once again.

Valwyn was growing old and the Ten Year war had drained even more of his dwindling strength. Taking his child and the Medallion, he departed for the Elden homelands back across the sea to rest and recover his spirit, leaving the kingdom in the hands of his steward, Dariel.

Unfortunately for Albareth, Dariel proved to be less of an able ruler than Valwyn.

Many Elden lords did not agree with the truce signed with Heidric and had fostered hate for him and his people over the years since. With Valwyn gone and Dariel seen as a weak replacement, these Elden lords attacked Ganestor hoping to tear it from the grip of Heidric's son, Prince Avar.

So it is that Dariel remains as a prisoner within the city of Eralan, fearful of his enemies and unable to stop the growing chaos festering in the land. Orcs have also been sighted coming in from the North and with Albareth's own forces stretched thin, bandits freely rob travelers on the roads in between each city.

A savior was needed.

Starting the game presented a storybook that told the story of the kingdom of Albareth and its current troubles. Upon starting play, the character would be able to chose from one of three characters to represent them in the game:

The main character was always fixed in the center of the screen and the adventure took place in both outdoor and indoor environments. Upon walking into a building or an underground area such as cave, the "top" of the area would cut away to show the player and their surroundings.

Saves were handled only at the inn after paying for a stay. This could make the game extremely difficult due to the size of the overland map and the number of dungeons on it. Dying so far from an inn would result in quite a bit of lost progress on the player's part.

Unlike other traditional RPGs, there are no statistics to roll or assign in the game. There is no leveling involved. Health was represented by a candle that slowly burned down on being injured. Recovery was handled either by standing still (during which health would slowly recover) or through the use of certain potions.

Item collection consisted of picking up potions, although only one of every type of potion was allowed to be carried. Money can also be gathered and used to purchase potions or better weapons.

Interacting with the environment, the interface displayed basic actions such as picking up objects, dropping them, a "look" command to examine things, and a "talk" option to engage NPCs in simple dialogue.

A day and night cycle as also integrated into the gameplay. Encounters at night were considerably more difficult than during the day. Enemies would spawn while the player was in motion.

The combat is in real-time with the player controlling the main character which is fixed in the center. The player would normally walk up to monsters and use the attack button to inflict damage. Monsters would drop gold, potions, or even items. 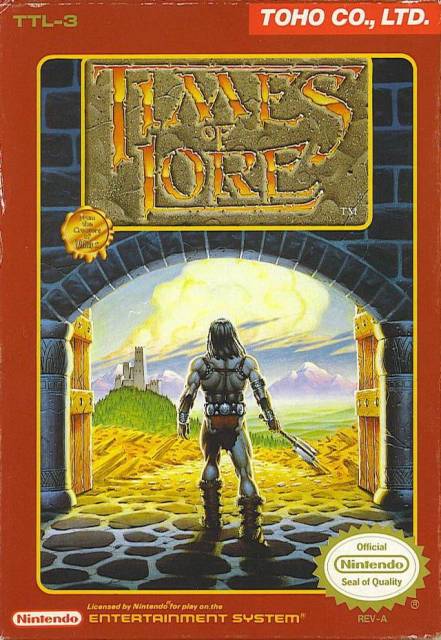