A mini-game collection featuring Timon and Pumbaa from Disney's The Lion King aimed at a younger audience. Released for PC and Mac and later ported to the Super Nintendo Entertainment System.

Timon and Pumbaa's Jungle Games is a game released for the PC, SNES, and Mac which gives players free reign over a unique jungle arcade featuring five fun, familiar games but given a Lion King twist.

There is also a Scoreboard in the Jungle Arcade which allows the player the opportunity to see the scores and rankings of each games best player(s).

There are also interactive points along the path of the Jungle Arcade which are each unique and even offer alternate animations and audio which make it fun to interact with the surroundings. 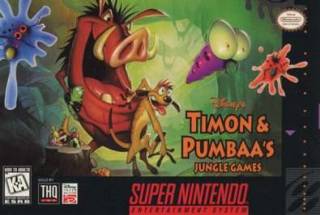