A spin-off in the long running Tengai Makyou series that takes place in a fictionalized version America in the late 1800s.
PlayStation Portable

Tengai Makyou: Daiyon no Mokushiroku - The Apocalypse IV is the eighth entry in the Tengai Makyou Japanese role playing series. Unlike previous installments in the series, which take place in a fictional version of Japan named "Jipang", this game takes place in a fictionalized version of 1890s America. The Fourth Apocalypse was developed by RED Company and published by Hudson Entertainment in 1997 for the Sega Saturn. An Enhanced port of Apocalypse IV was released in 2006 for the PlayStation Portable which featured a widescreen display, a new opening video, as well as many other additions. 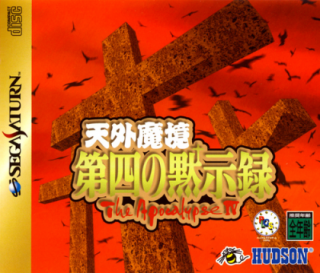