Kingdom of Paradise is an action RPG developed by Climax Entertainment and published by SCEI. It was originally released on November 15, 2005 and has the distinction of being one of the first completely original titles for the PSP. Its original title in Japan is Tenchi no Mon, and the game earned one sequel titled, Tenchi no Mon 2: Busouden, but this title has never been exported to the North American audience.

The game's plot initially takes place 300 years ago, after the Great War. One side of this war was the continent of Siema and the other continent was Ouka. Ouka is a land that possesses five different martial arts clans. Seima attacked Ouka with an army that contained a large beast as one of its weapons. The war continued for years until Ouka was finally able to lock the beast inside Ouka, thus winning the war. Peace was obtained, but with a delicate balance.

The five clans of Ouka each have to maintain an elemental balance within their own individual clans, in order to maintain peace and protect their given land. Each clan has its own sacred sword made, each sword representing a certain elemental power within the land. The Northern Genbu Clan has the elemental power of water and live atop a great lake. The Southern Suzaku Clan controls fire and is an all female clan where no man is allowed. The eastern clan is Sieryu. They control lightning and are a mountain dwelling clan. The western clan is Byakko, they control metal and have a strong military presence. The last, central clan is called Kirin and their element is earth.

The game actually begins 300 years after the above-mentioned events and we are introduced to Shinbu, the game's main protagonist. Shinbu is an orphan, growing up in eastern Ouka iin the city known as Chikuan with his foster father Seidatsu. Shinbu is a former member of the Seiryu Clan, but was expelled from the clan for looking at the ancient monument, with contains the secret about their clan's chi arts and so is forbidden. He makes his living as a bodyguard and escort, and on his way home from a job he runs into a panicked fellow Sieryu warrior, Sui Lin.

She tells Shinbu that the Kirin Clan has attacked the Seiryu Clan, killed the Clan Lord, and stole Sieryu's sacred sword. She says that she's the last of Seiryu disciples and enlists the aid of Shinbu in order to recover the sacred sword and restore order to the land of Ouka. As a former member of the Sieryu Clan, Shinbu is motivated to join the cause and this sets the rest of the game in motion.

The gameplay in Kingdom of Paradise primarily revolves around a more action-based RPG system with a very deep customizable sword attack move set. Attack moves consist of a kenpu system that allows the player to tweak the order of certain sword strokes, fighting styles, and elemental extras. As the game progresses you earn "bugei" scrolls which are in essence a string of predetermined sword strokes making up a full attack move. Each bugei scroll has a series of "kenpu" numbers that you can pick up from various enemies after defeating them. The more kenpu you collect, the more moves you can open up on that particular bugei scroll. You get to assign up to six of those scrolls to your attack menu and they can be changed on the fly during battle with a press of the R2 button. There are literally hundreds of different kenpu and as you pick up "freestyle" scrolls, that allow you to mix and match any kenpu you like, the fighting system can really open up to thousands of different combinations. It's VERY deep, but not to the point of being overly complicated or confusing. It's as simple or as complex as you want it to be. The game will also, from time to time, give the player an NPC partner to help with certain fights. Usually, it's Sui Lin, but there will be an occasional surprise partner here and there.

The game also has its own magic system called the Chi Arts. Chi Arts are elemental attacks that you can pick up in the different clan areas of the game. The attack is issued by first charging the attack by holding the square button down for a predetermined amount of time and releasing it when needed. The attacks are all elemental in nature and using the appropriate attack in the appropriate area will increase its effectiveness. Fireworks well against metal, lightning against water, water against fire, and so on. The same can also be said of the above kenpu attacks, so being aware of a certain clan's elemental weakness is beneficial to success in the game.

Lastly, Kingdom of Paradise wouldn't be an RPG without all the familiar RPG trappings. Leveling up Shinbu is the standard affair, Chi Arts will level up with repeated use (three levels), upgradeable swords, healing items, new rings (armor), items that temporarily buff Shinbu's stats, and peaceful villages where all things are eventually available for purchase. Information can also be obtained from speaking to random NPCs. If there's any RPG standards missing, it's doubtful that they will be missed.

Kingdom of Paradise, at its core, is a highly customizable ancient oriental action RPG with an elemental magic system. 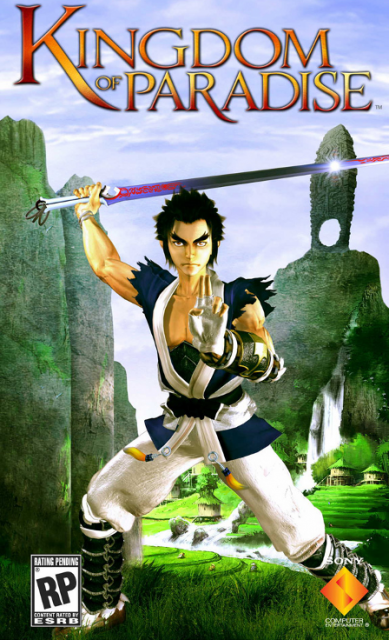