An arcade strategy game where you fight to dominate planets with your growing fleet of ships.

Galcon is a fast arcade strategy game set in space and is available on the computer and iPhone/iPod Touch. The game begins with a galactic playfield filled with multiple sized planets. The green planets represent the planets you have under control. Grey planets are unoccupied and are free fro the taking by either the player, or by the enemy AI. Any planets of another color belong to the enemy.  The goal is to take over all the enemy occupied planets.

The number on the planets is an indication of how many ships are on the planet and in turn, how many ships are required to take control of that planet. Basically, this number acts as both a resource and unit numbers. The player taps on one or more green planets and then designates a target by tapping either an enemy planet or unoccupied one. A number appears in the corner of the screen indicating what percentage of a planets ships will be sent when deployed. This percentage can be alternated by tapping the planet in question.

The game has multiple game modes which include Classic, which operates as described above, also Stealth, where the other ships are invisible to the player, on top of that, Vacuum, in which the game is played against a timer and 3-way, in which you are pitted against two other opponents.  There are 10 different levels of play, and with each consecutive level, the enemy becomes smarter and faster.

There are two possible strategies for winning a level. One is a battle of nutrition, in which you focus primarily on occupying as many planets as possible while holding back your enemy as a second priority. This allows for the massive build up of resources, which are then targeted at the enemy. The second strategy involves the player focusing their forces on holding back the enemy AI’s advance, while slowly collecting resources on the side. Benefits of this strategy include stifling an enemy AI’s growth and making it easier in the long term to destroy. Throughout the games difficulty levels and modes of play, these two strategies can alternate and even be combined given any situation the player finds themself.
Risk Galactic Conquest Oil Rush Eufloria 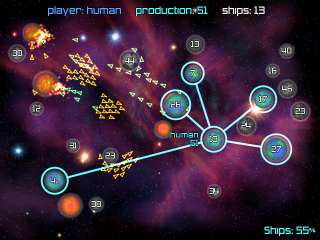