The universe is in disarray as the gods of the elements clash like children. Mankind suffers from constant peril as natural disasters run rampant from the elements not being kept in checked. As the gods' egos are challenged amongst them, a tournament breaks out to any and all challengers. The victor will get their dreams' deepest wish to become a reality.

Elemensional Rift is a 2D crossover platform-fighting game developed by NR, utd. Players initially take on the role of the gods of elements in a clash to knock out the opponent before they are knocked out. Hidden Characters can be unlocked through different methods. The judge provides a dynamic ruling system that will provide unique rules that the player can play around or risk a punishment.

Elemensional Rift is about knocking the opponent out of the screen in timed modes or remaining as the last player standing in stock mode settings. Inflicting damage towards an opponent will increase future knockback force. Unique to Elemensional Rift in the platform-fighting genre is an energy system that connects special attacks and guarding, ailments, and per-battle ruling system provided and regulated by a judge.

Players can journey through the story adventure to learn more about each character of the cast and get one of multiple endings.

Freeplay mode allows players to freely play random matches with customizable rules and settings to play the matches in the style of their choice.

A set of mini-games for a single player experience to test the player's skills in various methods with characters of their choice. Rankings are scored to allow players to continually improve upon their own personal records. 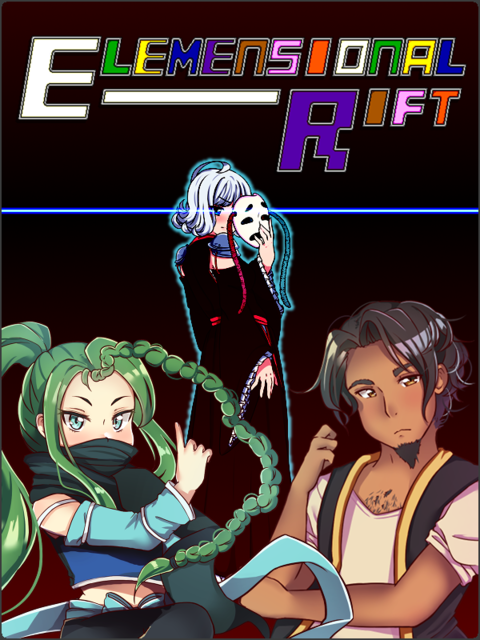