ActRaiser is a hybrid of two genres: city-building and action platformer. The player takes control of the powerful entity known as the Master in his quest to rebuild civilization.

ActRaiser is a Super Nintendo Entertainment System city-building simulation and action hybrid. The game was developed by Quintet and published by Enix (before their merge with Square), and the game was released during November of 1991. Although there was a sequel for the game, ActRaiser 2, it completely abandoned the simulation aspects of the original, which caused many fans to dislike it.

ActRaiser was also released in 2007 on the Wii Virtual Console in Europe, North America, and Japan. European mobile phones got a version of the game with a 2004 release as well. The game was also part of the Nintendo Super System, an arcade system that allowed gamers to preview upcoming releases.

ActRaiser is a relatively well-received game. It was accepted into GameSpot's Greatest Games of All Time in 2003 and was rated the 150th best game on a Nintendo system by Nintendo Power.

Not much of a plot exists in the actual game itself in ActRaiser. However, much is explained via the instruction booklet. The instruction booklet states that Tanzra and his six guardians attacked the Master. The Master was injured after the long battle, so he retreated to his sky palace and proceeded to fall into a deep sleep.

While the Master was sleeping, Tanzra drove the world into ruins. He divided the world into six lands with each being ruled by one of the guardians. When the Master awakes, fully rejuvenated, he is ready to free the world from the oppression of Tanzra.

After defeating Tanzra, civilizations begin to stop worshiping the Master with many losing faith in him and turning to other things. The servant notes this, and says that people only appear to pray and trust to the Master in times of trouble.

In ActRaiser, the player takes control of an incredibly powerful being known only as the Master. The Master has been awakened from a deep sleep to find the world in ruin. He and his loyal servant (a small angelic creature) then set out to rebuild civilization.

To begin this rebuilding process, the Master positions his sky palace above an area filled with enemies and demons. Then, the Master takes on the form of a strong warrior wielding a large sword. In these side-scrolling areas, the warrior uses his sword to dispatch many hazards, such as environmental hazards or monsters. The warrior can pick up power-ups by destroying statues situated in certain places around the level. The power-ups have a variety of effects, from healing the warrior, to bonus points. After defeating the boss of the level, the warrior moves onto the next section of the city-building portion.

The life bar that the Master has in his warrior form can also be extended as the Master gains levels. Leveling up is done through an experience system, in which the combined population of the Master's rebuilt towns amasses into experience. Also gained in leveling up is more SP, which can then be used to preform miraculous events in the city-building part of the game. Magical spells can also be granted to the Master through his followers that he can use in his warrior form. These spells deal significantly more damage than regular attacks, making them essential to the completion of the game.

In the city-building portion of the game, the player takes control of the Master's servant, a small cupid-like creature. Each town begins with only two humans, who then follow the Master's commands and aid him in rebuilding his world. They must be guided (the direction they are guided in is where they will build), and in turn will build houses, roads, and farms. The villagers eventually gain use of other skills, such as composing music or creating bridges.

The Master also has the use of several magical powers in the city-building portion. He can summon lightning, rain, sun, wind, or earthquakes. Using these abilities, trees, rocks, snow, monsters, and much more can be cleared. In a few sections of the game, the abilities must be used to assist the villagers, starting windmills or putting out fires, for example.

However, the city-building isn't calm. There are several Monster Lairs scattered around the map. Monsters are spawned out of these lairs. The people have the ability to seal these lairs, making it a necessity to guide the population to the lairs. The cupid can attack the monsters using his arrows, but once he loses all of his life, he cannot attack until the people increase in population. Once all of the Monster Lairs are sealed, the people can gain even more advanced technology and techniques.

The critically acclaimed 16-bit soundtrack was composed by Yuzo Koshiro. Brad Shoemaker described it as:

Orchestral video game soundtracks are the norm these days, but back then, the realistic instrument samples really brought out the beauty of Koshiro's aural backdrop. Even though it was a first-generation SNES game, ActRaiser's score remains one of the finest on the system

On Sep. 21, 1991, Koshiro released a 'Symphonic Suite From ActRaiser' CD that used a full orchestral arrangement for the soundtrack. It contained the following 10 tracks: 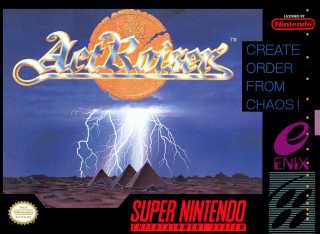