The sequel to the 1986 mahjong solitaire game Shanghai, improving on the original formula by adding multiple tile layouts, custom tile appearances, and a new versus tile-based mode known as Dragon's Eye.

Shanghai II: Dragon's Eye (known in most Japanese releases as Super Shanghai: Dragon's Eye, and not to be confused with the arcade game Shanghai II) is a mahjong solitaire game developed and published by Activision for MS-DOS PCs on November 16, 1990 and the Apple Macintosh sometime in 1991.

The sequel to the 1986 game Shanghai, Dragon's Eye improves upon the original's formula by adding high-resolution graphics and various configurations of both puzzle layouts (each based on the Chinese zodiac) and tile appearances (each with unique sound effects and animation). It also introduces some updates to normal gameplay, such as being able to restrict patterns that are not winnable from the start, while revamping both Challenge and Tournament modes (the latter of which is now a full-blown campaign mode) and adding a built-in puzzle layout editor.

The game's sub-title "Dragon's Eye" refers to a new game mode of the same name, bringing some of the traditional gameplay mechanics to a brand new turn-based one-on-one experience. In Dragon's Eye, one player is the "Dragon Master" and must work to build-up a formation by placing tiles from their three-tile hand, while the other player is the "Dragon Slayer" and must break down the formation by matching tiles both on the board and from their five-tile hand.

Along with a Japanese arcade adaptation, the game received ports to multiple consoles and home computers of the time, most notably the Sega Genesis (twice, one for different regions), the Super Nintendo Entertainment System, and Windows PCs. The Japanese ports of the game, handled by Hot-B, were renamed Super Shanghai: Dragon's Eye. Both Windows and Mac versions of the game were also bundled together with Shanghai: Great Moments as the 1997 compilation Shanghai Double Pack.

Much of the Shanghai mode remains unchanged from the original 1986 game. Players are given 144 mahjong tiles in a stacked formation and must match unrestricted pairs of the same type to remove them. Tiles are considered free to remove if they have no tile above them (even partially) and if they have no adjacent tile to the left or right of them.

Like the previous game, players can choose to undo their last move, automatically highlight a valid pair, or peek underneath tiles (forfeiting any game in progress). New to the series the ability to shuffle all tiles remaining on the board, allowing players to turn unwinnable games into winnable ones.

The game can be played in one of two playing modes: Solitaire and Challenge.

Like the previous game, players can choose to undo their last move, automatically highlight a valid pair, and peek underneath tiles (forfeiting any game in progress). New to the series is the ability to shuffle all tiles remaining on the board, allowing players to turn unwinnable games into winnable ones. In Challenge Mode, highlighting a valid pair adds 30 seconds to that player's timer, while shuffling all tiles adds 60 seconds.

In the Macintosh version, Challenge Mode has optional turn limits similar to the original game (at either 10, 20, or 30 seconds).

In the American Genesis version, the game includes an optional "Wild Tile" setting that adds a single Joker tile outside of the layout. This tile can be matched with any other tile, removing that tile and moving the other tile to its location.

The game includes 12 new tile layouts along with the original (known in-game as Shanghai). They are organized by their perceived difficulty, with higher-difficulty layouts having more tiles that block other tiles.

Each layout is based on an animal represented in the Chinese zodiac.

New to the series, Dragon's Eye is a unique one-on-one turn-based mode utilizing certain aspects of mahjong solitaire in a new way. One player is the "Dragon Master", whose goal is to build up the "Dragon" by filling up a specific 42-tile formation on the table. The other player is the "Dragon Slayer", whose goal is to remove all tiles in the central area of the formation (the "Dragon's Heart" and "Dragon's Limbs"). Games can be played in single-player (Master/Slayer, with a CPU opponent in the other role) or multi-player (Challenge).

Both players have their own tile hands (three for the Master and five for the Slayer), which is kept hidden from the other player. In Challenge, this is done with the honor system, with players being able to toggle their hand's visibility ("flipping" the tiles) at the press of a button.

Slayers can resolve multiple pairs a turn, and can draw additional tiles as long as they have less than five tiles in their hand. Once they can no longer draw or resolve pairs, or if they just choose to pass, they end their turn by pressing the Done button. However, if they have more than five tiles in their hand and there is an open spot on the board, they must place one of their tiles in any valid spot on the board prior to ending their turn (which gives the Master additional points).

The Master then selects one tile from their hand and places it in any valid spot on the board, then drawing one tile and ending their turn. Adjacent face-up tiles are turned face-down if there are tiles adjacent to both sides of it.

The central eight-tile diamond are unique, serving as the "Heart" (middle two tiles) and "Limbs" (six tiles surrounding the Heart) of the "Dragon". Removing tiles from them gives the Slayer additional points.

Unlike the rest of the layout, both the Heart and the Limbs allow players to place tiles above them if they are face-down. This upper layer "locks down" the lower layer, prevents the tiles below them from becoming valid pairs. Adding tiles to the upper layer gives the Master additional points.

Rather than the multiplayer leaderboard mode from the previous game, Tournament Mode in this game is now a full campaign mode where up to two players can play through all 12 new Shanghai levels along with rounds of Dragon's Eye.

Each tournament match has four "rounds", where players play a game of Dragon's Eye, then full completions of three Shanghai layouts, one for each difficulty level (Easy, then Advanced, then Master). The progress is as follows:

The Shanghai layouts have three unique feature in this mode:

Players are scored based on their score in Dragon's Eye and the time taken in the three Shanghai layouts. In Solitaire Mode, players earn points based on how fast they complete the layouts, while in Challenge Mode, the player with the lowest time earn points based on the time difference. When the tournament ends, the players are entered into either the Solitaire leaderboard or Challenge leaderboard, depending on the game mode.

In the Macintosh version, players can enable time limits for each Shanghai layout (5, 10, or 20 minutes).

Along with the standard mahjong tileset (known as Mahjongg), the game includes eight additional tilesets, each with special tile animation and sound. They are split into two groups, ones with wildcard tiles (Seasons and Flowers) and ones without:

These tilesets are as close to the traditional Mahjong layout as possible, with four copies each of the nine Dots, nine Bams, nine Craks, four Winds, and three Dragons, as well as one copy of the four Seasons and four Flowers as wildcard tiles.

All of these tilesets simply include four copies of 36 different tiles.

In the American Genesis version, the game's music, special cursor, and animated background image are also based on the tileset selected. It include all standard tilesets (with Fantasy as "Fantasy World" and Hi-Lo as "Cards") except Hanafuda and Lo-Hi. It also includes two bonus tilesets, which are unique in that the standard tile groups do not follow the 9-9-9-4-3 layout:

In the SNES version, the game's music is also based on the tileset selected. Along with has the standard nine tilesets, it includes two bonus ones:

The game first received Japanese-exclusive ports in 1991 to multiple computers used in the region: the NEC PC-9801, FM Towns, MSX, and Sharp X68000. All of these ports were published by Hot-B, changing the title to Super Shanghai: Dragon's Eye.

It was later ported to the Super Nintendo Entertainment System by Genki, published by Hot-B in Japan (as Super Shanghai: Dragon's Eye) on April 28, 1992. This version was later released by Activision themselves outside of Japan in early 1993 under the original name.

The game received two ports to the Sega Genesis: a Japanese-exclusive port by Home Data (under the title Dragon's Eye: Plus Shanghai III, known in-game as Dragon's Eye: Shanghai 3) on November 2, 1991 and a North American-exclusive port by Activision themselves in 1994. The naming used in the Home Data version was to differentiate itself from the arcade Shanghai II. The Activision version was later digitally re-released for the Wii (as a Virtual Console title) on November 27, 2009 (in Europe) and January 11, 2010 (in North America).

Home Data also made a Japan-exclusive port of the game to the PC Engine CD-ROM², on December 18, 1992, released by ASK Kodansha as both Shanghai III: Dragon's Eye and Battle Shanghai: Dragon's Eye. This version features two exclusive modes: Tournament (where players unlock animated pictures of scantly-clad hand-drawn women by completing puzzles) and Battle (a simultaneous multiplayer mode for up to four players).

It later received a port for Windows PCs on 1994 by Chaos Studios and Mediasoft Inc. Unlike other ports of the game, this version is identical to the original PC and Macintosh versions.

The game also received a Japan-only arcade port on July 1992 by Hot-B as Super Shanghai: Dragon's Eye. This version plays more like the arcade port of Shanghai (and its sequel), adding a continuous countdown timer that is replenished by making matches and adding a limited-use help system. It also adds an arcade-style scoring system with bonus points and high score tables. The Dragon's Eye mode is completely absent, with co-operative multiplayer instead.

The game includes three Shanghai game modes, with arcade operators opting to disable either (or both) of the Paradise and Quest modes: 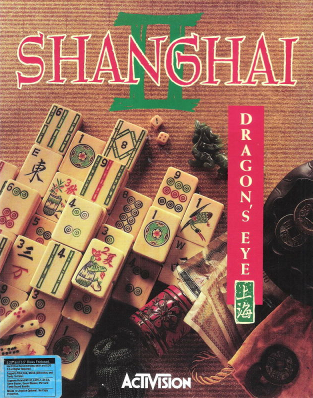