Alpha Prime is a first-person shooter action game that has graphics and physics like Doom 3, but does not use the Doom 3 engine. Alpha Prime also makes use of bullet time gameplay, seen in games such as Max Payne and F.E.A.R.

Somewhere deep in space, hidden in the infinity of the Universe, there is a treasure trove just waiting to be opened by the eager hands of a daring explorer. A mere asteroid, a piece of rock, a speck of dust lost in the boundless void, yet priceless to humanity. Under its frozen crust there are rich veins of the most precious substance known to man – hubbardium. This “liquid metal” is a key ingredient in the fuel of interstellar ships, thus enabling mankind to spread across the Universe from its base on Earth. Its importance is the reason why it is monopolized by the State Business Federation, a huge multinational corporation which is given control over every single step in production of hubbardium, from exploration to distribution.

So when an asteroid, which came to be known as Alpha Prime, and its fabulous riches were discovered, the Corporation quickly came and built a huge base on its surface to mine hubbardium.

But all was not well on Alpha Prime. While its hubbardium veins were plentiful on Alpha Prime, some of them were also dangerous. They slowly poisoned the minds of human workers, and damaged the positron brains of the artificial ones, including the central computer. Conditions on the base quickly became unstable and the Corporation finally decided to seal off the entire facility and leave. Only the most basic of services remained on, such as maintenance and security; including weapons systems. This was to prevent the facility from falling into ruin and to prevent illegal prospectors from entering and resuming the mining operation.

But illegal prospectors came anyway. The lure of the unimaginable wealth of Alpha Prime was too strong. Moreover, some of these illegal visitors were naturally quite resistant to the effects of “bad” hubbardium. So they arrived, they circumvented security protocols and partially resumed mining. Their use of hubbardium was rather different, though. They didn’t want to produce fuel; they came to make hubbardium into a powerful drug, worth its weight in gold on the black market. If the operation went successfully, they would become multimillionaires. But they miscalculated. Alpha Prime hubbardium was apparently too strong and started to exert influence even over the hardened minds of the miners. There was something very, very weird about this asteroid. It didn’t take long before they started to become desperate and called for help. One of those on the team, Warren, called his old friend Arnold, a seasoned, hubbardium resistant, explorer, and asked him to come and help them out of their dire condition.

And even though YOU, Arnold, already quit some time ago, you were finally persuaded, less by the obvious desperation on Warren’s face than by appeals to consider your tight financial situation by Livia, your ex-girlfriend.

So now it’s time to board your ship and head towards the unknown...

The Artemis is a ship in space. You learn the basics in this level, like how to crouch and jump. You will also learn how to pick up objects, because you must pick up a battery and place it into a ship system.  Additionally you will also acquire the first weapon, a hammer.  This level is short and no real action occurs, just story development.

You reach this level after escaping the Artemis via an escape pod. You land on the asteroid's surface and make your way into the complex. The game save names this level "Basement" however it takes place on the first floor of the asteroid mine facility. This level is part of the 2 levels demo.

This level is the basement, you take an elevator down to this level. The common enemy of this level are hostile mining robots. Their main weapon is the machine gun.

More of the same pretty much. You fight a combination of robots and human forces.
This level is part of the 2 levels demo.

This level introduces the tram. You get in and it takes you for a ride, fighting enemies along the way.

Just has one landing pad with a space craft. You don't leave in it.

Main aspect of this level is driving on the asteroid's surface with a buggy. Buggy is unarmed you must get out of the vehicle and engage some enemies.

Has more of a cavern look with the green colored Hubbardium mineral.

A small level. You engage a few enemy soldiers and then fight the final boss. Not difficult.

The soundtrack for Alpha Prime was composed by Jaroslav Kasny and contains the following tracks:


The soundtrack is available for free at the Alpha Prime's game site: http://www.alpha-prime.com

The demo is available on Steam. Links to download the demo from other sites, without Steam, are found in the "Goodies" section of the Alpha Prime game site:   http://www.alpha-prime.com 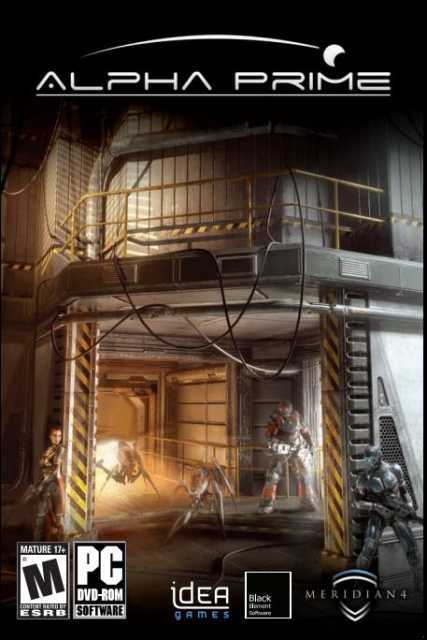