Known as Jakku Burazāsu no Meiro de Hīhō!?, (or"Jack Brothers' Hee-Ho at the Labyrinth!") in Japan, it is one of the couple dozen Virtual Boy games ever released worldwide.

Jack Bros. was released by Atlus for the Nintendo Virtual Boy console in 1995. The game stars two mascots of the popular Megami Tensei series of games -- Jack Frost and Pyro Jack -- along with newcomer Jack Skeleton. The gameplay is reminecent of the Gauntlet series. The game has the player navigate mazes, shoot enemies, collects keys, search for exits, and fight endstage bosses across six stages all before time runs out. The game is noteable for being the first Megami Tensei game released in North America. It is highly sought after by Nintendo Virtual Boy game collectors.

Every year on Halloween morning, the portal to the World of Fairies opens, allowing a pathway to form between their world and ours. One year, the impish Jack Brothers decide to venture into our world to cause mischief on Halloween night. Unfortunately, the brothers lose track of time and must pass through the portal again by midnight or else be banished from the World of Fairies. 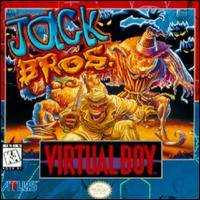