A top-down action game for the Super Nintendo. The gameplay often resembles that of Arkanoid/Break-Out bat-and-ball games, as the player uses a ball of light to fight enemies and must keep it on the screen.

Firestriker, known as Holy Striker in Japan, is a top-down action game. The player, as a warrior clad in red armor known as Slader, must use the Trialight to fight through a series of maps. The Trialight is naturally inclined to fall to the bottom of the screen, and should it leave the screen the player loses a life. The player must manipulate the Trialight (by swinging at it) to maneuver it through the topmost exit. The player can also defeat enemies and find power-ups, as well as recover their health and earn points. They're also given a helper (which can be controlled by a second player) who can assist in keeping the Trialight in play.

The game also includes a secondary mode for up to four players that allows them to use the Trialight in a soccer-like game. 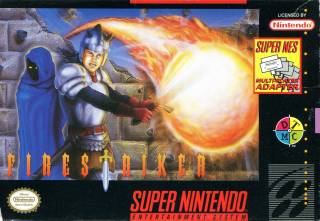