A first-person shooter set in the Warhammer 40,000 universe. Follow a Tau Fire Warrior named Kais during a 24 hour period as he battles Imperial and Chaos forces to rescue the kidnapped Ethereal.
PlayStation 2

Warhammer 40,000: Fire Warrior is a first-person shooter developed by Kuju Entertainment and published by THQ. It was released, alongside a book of the same name, for the Playstation 2 and PC in September 2003 in the US.

featuring both a single-player campaign and multiplayer. It gained notoriety for being the first Warhammer 40,000 game to be made by THQ and for starring the voice talents of Tom Baker and Brian Blessed. It was also one of the first PS2 games with online capabilities. The game has a Pegi rating of 16 in Europe and a ESRB rating of M in the US.

The story takes place over a period of 24 hours. The opening cinematic shows the ethereal Aun'el Ko'Vash visiting a Tau colony where he is taken by Space Marines of the Raptors chapter under the orders of Governor Severus.

The game begins with Kais and other Fire Warriors landing on an Imperial world with the mission to return the Ethereal. Guided by his commanding officer, Lusha, Kais battles with the Imperial guard through trenches before the Ethereal is located at Governor Severus’ prison. Kais is sent alone so as to not draw too much attention and eventually rescues the Ethereal after killing a Space Marine.

They are returned to the orbiting Emissary class Tau battlecrusier but an Imperial Battleship attacks and launches boarding pods to recapture Ko'Vash and destroy the ship. The pods contain vast amounts of Imperial Storm troopers and some tech priests but Kais foils their attempts to sabotage the ship and the boarding parties are repelled. A Tau counter-attack is organised and a boarding force is sent to disable the ship and capture Admiral Constantine. Kais successfully fights his way through the ship’s bridge and is just about to capture the Admiral before he is knocked-out.

Captain Ardias of the 3rd Company of the Ultramarines Chapter admires Kais ability to have gone so far and lets him live. Ardfias brokers a truce between the opposing forces. However just as

the Admrial and Ko’Vash conclude the negotiations Governor Severus reveals himself as a traitor and summons Word Bearers Chaos Space Marines and Thousand Sons Sorcerers. Ardias gives Kais back his equipment and tells him to save the Ethereal so that they can fight the chaos forces. The Chaos Space Marines try to take control of the Imperial ship’s guns so they can re-start the war but Kais is able to destroy the guns. The ship is set on a self-destruct as it is now tainted by chaos. The crew abandon ship by drop-podding down to the surface. After destroying a Chaos Dreadnought, Kais does the same using a Dreadnought drop-pod.

Landing in a ruined city Kais fights his way to an ancient Imperial Titan that the Chaos Space Marines have taken control of. Kais has to defeat several new enemies such as Raptors, Chaos Terminators and a Daemon Prince to reach the Titan. With Ardias’ advice Kais destroys the Titan by planting explosives.

The game comes to an end as Kais returns to the Prison-Fortress from the beginning of the game and navigates his way into the underground catacombs of the prison where he kills a Chaos Spawn. Kais eventually comes to a Chaos temple where he plants explosives. Governor Severus and Ko’Vash appear but Severus no longer needs the Ethereal and disintegrates Ko’Vash. Severus is then transformed into a Changer or Ways, a powerful daemon. Kais dodges the daemon’s attack long enough for the explosives to destroy the temple which causes the daemon to lose stability and be returned to the warp.

In the Epilogue, Kais returns to the orbiting Tau warship with Lusha. Captain Ardias orders an Exterminatus of the planet so as to destroy any trace of chaos left on the planet. The Tau ship is then seen departing.

The game follows the usual conventions of a first-person shooter. It borrows many features from Halo: Combat Evolved such as a Shield-Health Metre system and only being able to hold two weapons and a dedicated button for grenades. There is also a dedicated button for a melee knife attack and an infrared mode for lowlight conditions.

While Kais can hold two weapons one must be of Tau origin and this, depending on the player’s choice, changes as the game progresses, getting more powerful so as to combat the harder enemies.

At the end of each level the player is ranked on how well they did:

Grade A – Shas’el (Noble or Knight)

The default controls of the PC version of Fire Warrior. The game has fully customisable controls if the user wishes to change them.

*Only for weapons which have a scope mode.

Profile: A ceremonial knife not intended for combat use. Carried by the leader of a Fire Warrior team that has performed the Ta’lissera ritual and bonded as a group.

Note: Although Kais carries the knife he is not a team leader. This has been done for gameplay reasons.

Race: Unknown. The same grenade type is used by everyone.

Profile: A grenade that is used by both Tau and Imperial forces. When thrown it leaves a purple trace in the air. Upon contact with an enemy it explodes, often reducing the victim to gore. If it does not hit an enemy then it takes a few seconds to explode.

Profile: The standard weapon of a Fire Warrior. The pulse rifle uses an induction field to propel a particle, which reacts by breaking down to create a plasma pulse as it leaves the barrel.

Profile: A carbine version of the pulse rifle. It acts in the same way but has a shorter barrel for better portability and so it is easier to handle in tight spaces. It also has a grenade launcher that can be useful when engaging large numbers of enemies.

Profile: Standard issues sidearm for the Imperial Guard. This small, single-handed weapon is accurate but lacks power. It is often encountered on opponents who utilise an additional mode of attack such as Sergeants and commissars.

Profile: The standard issues rifle of the Imperial Guard. This two-handed, rapid-fire weapon fires lasers. Weak alone, in numbers or in the hands of a skilled opponent it can be a dangerous gun to face.

Profile: Standard issues of the Storm Troopers faced in the game. This is a mechanical, rapid-fire weapon which uses bullets. Although archaic in design compared to Tau weaponry, it can cause significant damage to the unprepared in seconds.

Profile: Used by Storm Troopers throughout the game. This high-impact sniper rifle has a zoom-capable scope, allowing the user to target enemies with deadly accuracy. Extreme caution is advised when facing adversaries carrying this rifle.

Profile: Used by both Imperial Guard and Storm Troopers. The shotgun is a lethal weapon at close-quarters. Its dual-shot capability causes impressive damage, but the gun lacks accuracy at distance.

Profile: Standard issues weapon of the Space Marines. This gun uses self-propelled rounds that explode when they have penetrated a target to maximise damage. One of the most deadly guns in the game.

Profile: Standard issues weapon of the Chaos Space Marines. This gun uses self-propelled rounds that explode when they have penetrated a target to maximise damage. One of the most deadly guns in the game. It is exactly the same as the standard bolter but has been modified with Chaos glyphs and an eyeball mutated on it.

Profile: A weapon used by a variety of troops on either side. Fires a blue stream of plasma that is quite effective for the tougher enemies of the game.

Profile: A weapon used by a variety of troops on either side. Fires a blue stream of plasma that is quite effective for the tougher enemies of the game. This version has better accuracy and is more powerful than the pistol.

Profile: Used by Imperial forces. This gun fires superheated molten that melts through even the thickest of armour. In the game it is used as a flamethrower.

Profile: An experimental weapon, recently available to the Tau. The game mentions that it is a classified weapon that should be kept out of enemy hands but it is found everywhere in the game soon afterwards, there’s about ten in the last area alone. The rifle fires a metal slug along a pair of conductive rails using electrical currents. Powerful enough to punch through tanks and later enemies. Primary: Single Shot

Profile: Found during the half-way point of the game. This looks like a minigun and fires vast amounts of pulse shots. One alone won’t do much damage but the gun has a 250 shot feed.

Profile: Used by both forces during the later parts of the game. It is a conventional Missile Launcher but has a very large blast radius and is deadly in tight corridors. Especially for the player.

You can encounter and man gun emplacements. These usually have mounted weapons that are too large to carry around. To man a gun emplacement, move next to the weapon and press the ‘Use’ key.

Fire Warrior was one of the first Playstation 2 games that had online multiplayer using the Network Adaptor add-on. Both the PS2 and PC had their servers hosted by Gamespy. Matches allowed for 8 players who could battle in three different game modes using the weapons from the single player campaign.

There are three diffrent game modes available, which should be familiar to players of other multiplayer first-person shooters.

The online is no longer playable as GameSpy's multiplayer service has been shut-down.

"Players compete in a head to head battle for survival of the fittest. No team, no orders, no rules-just one winner!"

"Align yourself with the Red or Blue team and attempt to eradicate your enemy! Highest team score takes the honours!"

"Teams as above but with a higher purpose. Capture the enemy's flag and return it to your base to score. Defend your own flag as the enemy attempts the same. Highest team score takes the honours!"

The player can change their online handle here and choose which avatar to use.

Set in a large bunker with no man’s land type outside with trench system which connect around the bunker and lead inside it. The bunker has a large interior which has two Ultramarine landraiders inside which act as cover.

Set on the outside of the Imperial Battleship. Has a large outside with gothic architecture, scenery cannon and large storage containers for cover. Corridors lead inside the ship and to a higher level which has a room.

Set around a grand library with Warhammer 40,000 artwork on the walls. Corridors lead off to other rooms such as a surgery observation room and a bottomless pit which has four floating platforms that the user can jump on. There is also a entrance hall which connects the corridors and rooms.

Set in an industrial sector which has been ravaged by war. A large arena with lots of cover scattered all around. The player can climb on pipes that are around the arena to gain height.

The voice production was done by Allinthegame Ltd.

DirectX 9 (Included on the disc)

Note: While the game installs on later Windows operating systems and 64bit systems an error concerning "Microsoft .NET Framework1.1" occurs when trying to start the game launcher. This can be bypassed by creating a shortcut directly from the .exe in the games directory. However features such as the configuration tool will be unavailable. 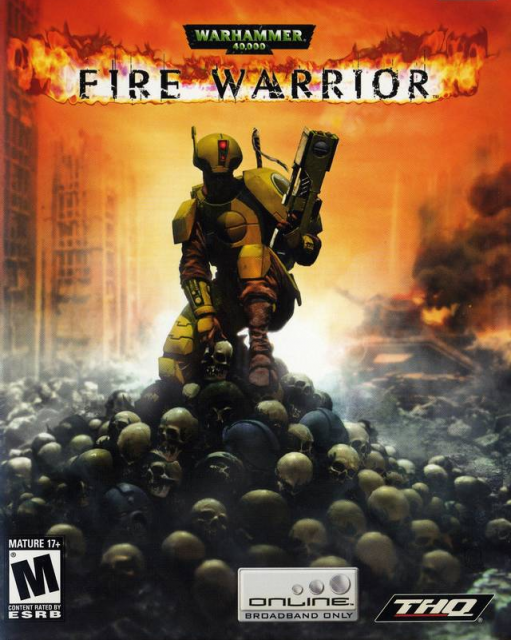