Emoyan no 10-bai Pro Yakyuu ("Emoyan's Tenfold Pro Baseball") is a baseball sim for the NES produced by Hect. It features the name and likeness of former pitcher Takenori "Emoyan" Emoto, who by 1989 had already retired from baseball but continued to work as a commentator and author of books on the sport, before eventually going into politics in the '90s. One such book, titled "How To Make Watching Pro Baseball Ten Times More Fun," is where this game derives its name. Besides Emoyan, the game uses fictional players and team names.

The game has a heavier sim aspect than most baseball sims for the Famicom, with players choosing a spot on a grid to both bat and pitch towards, the idea being to predict the ball's movement or the batter's likelihood of reaching it. Fielding is performed automatically. 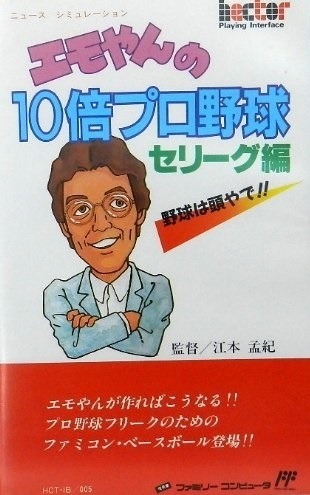