The third main spin-off of the Mortal Kombat series, retelling the events of Mortal Kombat II through the eyes (and fists) of Shaolin warriors Liu Kang and Kung Lao.
PlayStation 2

Mortal Kombat: Shaolin Monks is a 3D action-adventure beat-'em-up game developed by Midway Los Angeles and published by Midway for the PlayStation 2 and Xbox on September 16, 2005.

A spin-off of the Mortal Kombat series of fighting games, Shaolin Monks infuses versus fighting game mechanics (along with the series's staples, such as Fatalities) with beat-'em-up elements. Along with the main campaign, which can be played co-operatively with two local players, the game also features an offline Versus Mode, letting two players duke it out with unlockable characters and unique stages (each with different layouts and traps).

Rather than serve as a character's prologue to the original Mortal Kombat (like previous spin-offs), Shaolin Monks retells the events of Mortal Kombat II through the perspective of two Shaolin Monks: Liu Kang and Kung Lao. Players assume the role as one of these warriors as they venture through the nightmarish realm of Outworld under the instruction of the thunder god Raiden (with assistance from action movie star Johnny Cage and elite Special Forces operative Sonya Blade) to save Earthrealm from the sinister plot of the sorceror Shang Tsung. Along the way, they encounter various allies and enemies from the first two Mortal Kombat games, including fan-wielding warrior Kitana, four-armed behemoth Goro, and hellish ninja Scorpion.

As a hidden bonus, the North American version of the game includes an emulation of the arcade version of Mortal Kombat II, which is unlockable with either a special cheat code or by completing secret missions in the main game.

Gameplay features in the game include a fighting mechanic called Multi-Directional Kombat System. This system allows the player to form combo attacks on multiple enemies on the ground as well as bringing the opponent into the air like Devil May Cry and continuing the combo. Familiar to Mortal Kombat players are stage fatalities that can be performed when playing on certain key spots like pits in the floor or rotating spikes. Like stage fatalities another adoption of the Mortal Kombat franchise is the fatalities. These are performed different then the arcade versus counterpart, here the player has to perform combos on multiple enemies to fill up a fatality meter. Once this meter is filled a fatality can be performed at any point in the game against any enemy. A new finishing move called Mutalities can be performed like fatalities but on multiple opponents. Lastly, Brutalities are the last finishing move which like Mortal Kombat 3 is a explosive combo attack that can be performed on a opponent or multiple opponents. 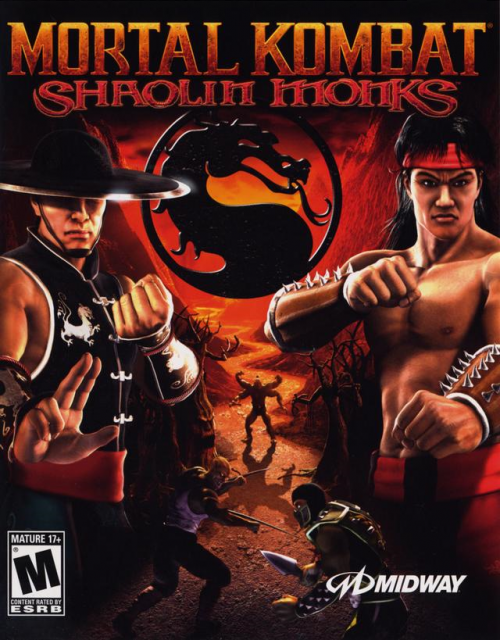