A classic-inspired RPG set in a post-apocaliptic fantasy world. This game includes both English/Spanish languages.

Drekirökr is a role-playing game in development, made by Ragarökr Project on RPG Maker XP.

The game's name is a reinterpretation of the old norse word Ragnarok (lit. "Fate of the Gods" or "Twilight of the Gods", depending on spelling), changing old norse prefix Ragna (gods) for the Islandic word Dreki (dragon).

The story is post-apocaliptic, based on the premise of a world similar to the real world, after a devastating incident which wiped out most of the human civilizations. The story starts millions of years after this incident, where humans struggle to survive, fighting against monstruous creatures known as lilim. It also uses some pseudo-science explanations to explain fantasy elements, such as magic and mutations.

It includes themes of mythology, more prominently Nordic for some names and creatures, but also from other sources of folklore such as Chinese, Japanese, and Latin-American. Characters also have a mix of names as they're meant to be descendants from different cultures, like the protagonist being Japanese while others are more westernized.

The world is comprised of what is referred in-game as Astral Planes. These are seen as different versions of the same world, but aligned along the spatial and temporal axises, also definable as parallel worlds. Naming for the different Astral Planes in Drekirökr come from the Nordic mythology.

As it's usual for japanese-inspired Role-Playing games, the game can be divided into two main parts: scenario exploration and battle.

The player controls an avatar in a scenario seen from a top-down perspective, the avatar representing a character which is leading your current group of characters. The leader can be changed, which affects what skill can be used on map, such as being invisible to monsters to putting bombs in the scenario.

Enemies are visible in map, and battles are activated on contact. The game focuses on rewarding exploration by finding treasure and extra lore topics, when found these topics can have a small influence in how characters react to certain events.

Characters have a list of skills that can execute each turn. These skills can vary, from melee attacks to magic spells, and usually have an MP cost. At times they can also have a turn cooldown, which limits their use. Another important characteristic is the inexistance of a basic Attack command. Instead, the character equipped weapons is shown in the same list as other skills. They have characteristics dependant to that weapon and behave like any other skill. 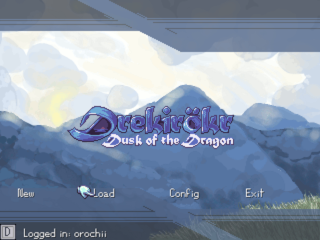