Play as one of the eight colored Buddy teams and wreak havoc upon opponents or go solo and complete all eight worlds of the campaign mode in this RTS death match game.

In Team Buddies, players go through a campaign mode as any of eight different teams. Each team are a different color, but have no different specialities to other teams. The teams available as are, red, blue, green, yellow, pink, purple, orange, and brown. The game is an RTS game with a twist. Players control one buddy and give out orders to the rest of the team. The team consists of four buddies including the player. Building teammates and weapons is very simple. The main resource is crates. Each stage has one or more crate drop points where crates constantly drop, which can be taken back to base to build stuff.

At the base is a 2 x 2 x 2 stacking grid. Players can put crates on the grid in different combinations to get different weapons. All the crates are red except for blue super crates, which turns weapons into a super weapon.

If a base is destroyed, the stacking grid can no longer be used, which means the player can't build any buddies, weapons, or vehicles. One of the objectives in the game is to destroy the enemy bases to obtain a huge advantage in the battle.

Some single player missions start the player at a disadvantage by providing a limited number of crates to build with, which means the player must be efficient or try and steal an opponents crates. Some of the boss battles destroy the player's base right at the start.

Buddy Land is a surprisingly peaceful land. All the buddies were friendly and happy. Until one day, something came out of the sky and blocked the sun. The buddies called it The Great Eclipse, which started dropping crates. The buddies kicked them open to find weapons, which led to the buddies splitting themselves into colored teams and starting a full blown war.

The single player campaign lets the player choose one of the colored teams and taking missions from eight different worlds. As the player progresses, they unlock more weapons to make through crates and even new buddies to make like ninja and cyborg buddies.

Being an RTS, Team Buddies strong point is its multiplayer games. Up to four players each control a team and commence beating the hell out of each other's buddies. There is no option for co-op battles.

Out smart the opponent or rush in with all guns blazing and wipe out all the buddies off each teams to be the last buddy standing. There is always a time limit on this match, which means the player loses if time runs out. Players can choose which weapon set to use as well. Depending on what weapon set is chosen, different weapons will be created through crate combinations.

The key to domination is to be the team with the most points when the timer runs out. The map has lots of relics that when players touch them, they change color. After five seconds of it being the player's, that player gets five points. Players can win by getting the set limit of points or having the most points when the timer runs out. If a player loses all their buddies in this mode, they will respawn with a basic weapon. Even if the player's base is destroyed, they will respawn, but can't build.

Capture is similar to CTF in many other games. Each team has an animal in their pen. It could be a dog, or a pig, or anything else. The player must capture their opponent's animal, and bring it their pen. If one player brings their animal to a player's pen while that player's animal is still there, the first player scores fifteen points. If the player's animal isn't there, the first player scores ten points. The first team to score the set amount of points or most points when timer runs out wins. The same rules apply as they do in domination, if a team is wiped out, they will still re spawn.

Bomball is like American football. Teams of three buddies enter the arena and a bomb spawns in the centre of the stage. Each team has a goal which consists of two goal posts and an explosion area. Players must carry the bomb and throw it or drop it onto the opponents explosion area. If it goes through the goal post, the player scores five points and an additional seven points if it explodes in the explosion area. Teams always respawn with basic weapons. Some levels have better weapons that can be found in the map. To win, players must get the most points before the timer runs out or get the set points to win.

Using the stacking pad, players can stack crates on it to create weapons and buddies. Below are all the different combinations, the weapon obtained either depends on what world the player is in during single player or what weapon set the player has chosen for multiplier matches. 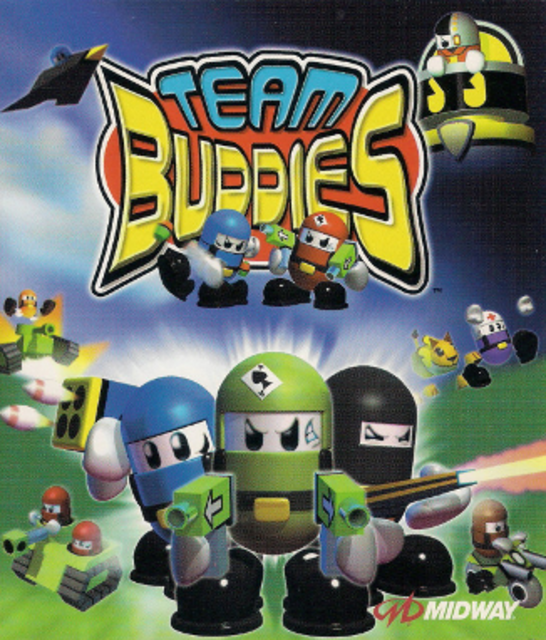