The Legend of Zelda: Oracle of Ages

One of a pair of Zelda games released simultaneously for the Game Boy Color. Oracle of Ages gives Link the ability to travel through time.

The Legend of Zelda: Oracle of Ages is a Game Boy Color game released simultaneously with The Legend of Zelda: Oracle of Seasons and follows Link's adventures through the land of Labrynna. The game is published by Nintendo and developed by Flagship. The two Oracle games feature unique connection options, allowing players to collect treasure and objects using a link-up or password mode.

The developers intended initially to make three games, all of them representing one part of the Triforce. Upon realizing that this system would be too difficult they canceled the third game and decided only to work on Oracle of Ages and Oracle of Seasons.

Oracle of Ages is a traditional Zelda game. Link explores the overworld, gathering clues and occasionally, items. After traveling about, Link makes it into various dungeons (eight dungeons are in this game, referred to as levels) and collects an item within each one that is normally used to go about the dungeon and eventually beat the dungeon's boss battle.

A variety of areas in the game are not in the traditional Zelda style. Instead, they take a style more familiar with the Mario games. In these side-scrolling areas, Link can still use all of his items as usual.

Introduced in this game are Gasha Nuts and Magic Rings. Gasha Nuts can be planted in certain areas around the overworld. After they grow, the seed on the tree can be opened for an item, normally a Magic Ring. Magic Rings can be appraised and then worn, for various effects, from transforming Link into an Octorok, to upping defense.

The game makes heavy use of the Harp of Ages which opens up time portals to go between the past and the present. In the late game there are additional "Tunes" which don't require the usage of a portal to travel through time, allowing players to travel at will between the two times. There are many things that are changed between the two times. One example is that the Black Tower is not finished in the past, but it is finished in the future. Some other buildings also have slightly different layouts depending on the era.

After finishing Oracle of Ages, passwords can be gathered in Oracle of Seasons which can then be told to various NPCs (non-playable characters) in the overworld. After telling the various NPCs the password, an item is presented to Link. Items vary from the Master Sword to a Piece of Heart. After collecting the item, the password given to Link by the character can then be used in Oracle of Seasons.

The game starts with Link dropped into Labrynna. After walking around he finds a woman flanked on all sides by monsters. Upon Link's arrival, the monsters run away and the woman (who turns out to be Impa) asks Link to help her find a singer in the forest. The two find the singer, who is Nayru, the Oracle of Ages, singing and playing her harp for the forest creatures. The demon sorceress Veran emerges from Impa and possesses Nayru's body which causes all time in Labrynna to go into chaos. Impa gives Link a sword and tells him to go see the Maku Tree, who tells Link that he must get the eight Essences of Time to rescue Nayru.

A unique feature of this game and Oracle of Seasons is the ability to input a password from one at the start of the other, turning the other into a direct sequel with extra hidden secrets and a continuing story. This can also be done by hooking up two Game Boys with a link cable, one with the beaten game and the other with the one the player wishes to have the progress transferred to.

Though Link does not start the game with all the items from the other game, he does begin with the wooden sword (instead of having to find it at the beginning) and four heart containers instead of three. Certain characters will also know you as the hero of the land from the previously beaten game (in Oracle of Ages, Link will be known as "Hero of Holodrum"), and you'll be reunited with the same animal companion as the other game as well.

Beginning a linked game also expands the plot away from the main Veran story, tying it into the main series further by having Zelda arrive and get kidnapped by Twinrova, who are hoping to sacrifice her to bring Ganon back. The game then concludes with an extra dungeon and a battle against Ganon. (Side note: though both Ages and Seasons conclude the same way and behave similarly when the passwords are input, according to Hyrule Hystoria's timeline, Seasons takes place canonically first. It doesn't make a difference when the games are played, but if that's important to you, then keep it in mind when playing.)

The last major aspect of the linked games are the inclusion of secrets, where certain characters will ask you to tell a secret to someone else. Upon telling the correct person the secret (a specific combination of characters), you'll be given a new item, generally an upgrade to a previous one, eg the seed satchel to a larger one. These are not necessary for achieving the "true" ending, but can give you items that you would be unable to receive otherwise, such as Bombchus. 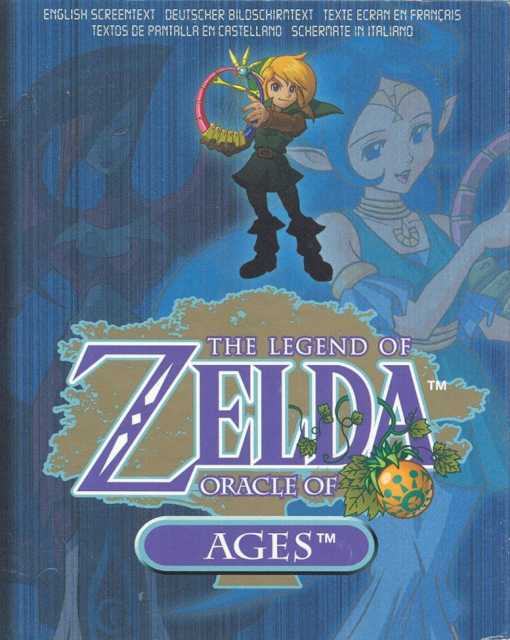