Fighter's History Dynamite (known in Europe as Karnov's Revenge) is a 2D fighting game developed and released by Data East for arcades (running Neo Geo MVS hardware) in 1994. It was later released in Japan and Europe for the Neo Geo AES and Neo Geo CD home systems on April 28, 1994.

It is the sequel to the 1993 arcade game Fighter's History (infamous for bringing Data East into court for being identical to Capcom's Street Fighter II), revamping the original's gameplay by adding more speed, new mechanics, two new characters (with playable bosses), and secret special moves.

It was ported to the Sega Saturn (in Japan only) on July 4, 1997, adding new control options and soundtrack options (for both the original and the NGCD arranged soundtrack). Much of the game's assets were also reused for the Japanese-exclusive Super Famicom spin-off, Fighter's History: Mizoguchi Kiki Ippatsu!!

The game later received a digital re-release for the Wii Virtual Console in Japan (on June 8, 2010) and North America (on December 27, 2010), the Zeebo (on April 23, 2010), and as part of the ACA NeoGeo series (on November 16, 2017 for the Xbox One, PlayStation 4, and Nintendo Switch, using the Karnov's Revenge naming for the North American release).

All of the characters from the original Fighter's History make a return, all with new special moves (including secret, powerful moves). While the character graphics were slightly modified for the new Neo Geo hardware, Karnov was the only character to receive entirely-new graphics. The bosses of the previous game (Clown and Karnov) are now playable. 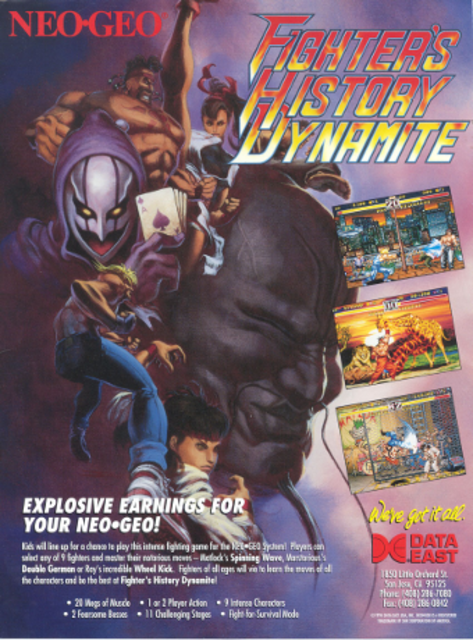