A "virtual arcade" compilation featuring 32 of Capcom's classic arcade games, with 1943: The Battle of Midway free-of-charge.

Capcom Arcade Stadium is a free-to-play "virtual arcade" compilation developed and digitally released by Capcom for the Nintendo Switch on February 17, 2021. It was later released for the Xbox One, PlayStation 4, and PC on May 24, 2021.

The platform offers 32 arcade games released by Capcom, most of which used CP System and CP System II hardware. The 1987 shoot-'em-up 1943: The Battle of Midway is included free-of-charge, with all other games purchasable. Originally, games were sold in sets of 10, with each set corresponding to a different arcade game era. This was changed as of October 2021 to allow piecemeal game purchases.

In addition to multiple visual filters and wallpaper options, the game includes a "3D" option that allows players to play the game as if they were in front of an arcade cabinet. Along with a generic upright cabinet, the game includes accurate recreations of Capcom's Status, Mini Cute, and Impress cabinets.

A sequel, titled Capcom Arcade 2nd Stadium, has been announced.

The compilation includes 32 titles, with both English and Japanese versions. Three of these titles (Trojan, Mercs, and Armored Warriors) use their Japanese titles in both versions (Tatakai no Banka, Senjo no Okami II, and Powered Gear: Strategic Variant Armor Equipment). 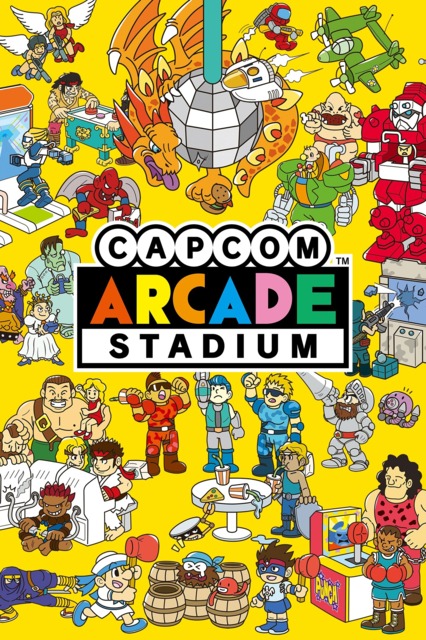