Zillion is a sci-fi side-scrolling action game with many similarities to the Metroid series. As the protagonist JJ, the player is tasked with retrieving 5 floppy-disks from an underground base on Planet X.

Zillion is an action/adventure game released for the Sega Master System, based on the Anime series of the same name. The protagonist, JJ, is on a mission to retrieve five floppy discs from the possession of the Norsa Forces on Planet X. The game begins with JJ landing on the planet's surface in a spacecraft, where he uses an underground access hatch to enter the Norsa Forces base. The entirety of the game is contained within the underground base as well as the small area of the planet surface directly above the base.

Zillion is a side-scrolling adventure game, most similar in execution to the original Metroid, assuming many of that games conventions such as locked rooms, boss fights and a labyrinthine underground maze that players must traverse. Like Samus, JJ carries a gun, though his is a more traditional hand-pistol. Upgrades to the laser, to speed and jump height, and to health happen throughout the game.

JJ also has secondary mission objectives, that of rescuing his captured partners Apple and Champ, both of whom are being held prisoner in the underground base and to enter a code into the Norsa Forces main computer initiative the self-destruct mechanism. To achieve these goals, JJ must navigate through the base, avoiding tripwires, containment fields, automated turrets, land mines, and Norsa Forces security guards. Access to many rooms are initially blocked, and JJ can only open them by accessing computer kiosks in other rooms to gather codes to open doors. Upon rescuing his partners, the player can then opt to play as them. Both Apple and Champ offer different speed and strength than JJ, allowing them to access different areas of the map.

The underground base consists of individual rooms that are one screen in size and scroll only when you move to a new room, coupled with the occasional freely scrolling hallway. Zillion was notable for featuring an in-game map that gave your present location within a grid, each cell of which represents a room in the base. However, the map did not show how the rooms connected, so the player was still required to familiarize himself with the base layout in order to efficiently navigate the base. Gamers were often forced to make custom maps when playing Zillion and for good reason. Not only was the game hard to navigate by design but there was also a innocent looking room that was a game ending trap. Upon the player entering the room and walking past a certain point the player could never exit and would have to start the game from the beginning. It was debated by fans of the game if this was truly by design or if it was a large oversight on the part of the development team. The player encounters the room about half way through the game and if they are paying attention when entering they will know not to continue on into it.

Zillion was released in 1987 in the US, timed to coincide with the anime that inspired it. A sequel, Zillion II was released in 1988. Sega also took the game's gun as a model for its release of the Sega Master System Light Phaser. 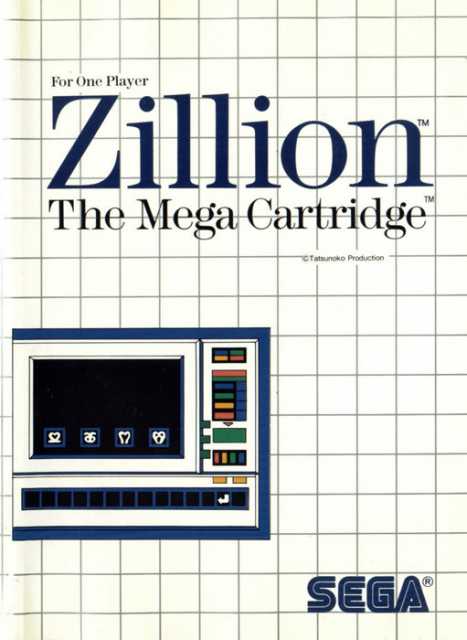