Blackwell Unbound is a prequel to The Blackwell Legacy adventure game and is the second game in the Blackwell series. Set in 1973, medium Lauren Blackwell (Rosangela's aunt) along with spirit guide Joey Mallone, help ghosts achieve closure and "move on" from the mortal world, leading to a larger mystery.

Blackwell Unbound is the second point-and-click adventure game of the Blackwell series released by Wadjet Eye Games in 2007. The game features a similar art style to the realistic LucasArts and Sierra adventure games of the late 80s and early 90s with the game operating at a resolution of 320x240. As part of the series, the game follows a procedural drama style episode, with series-spanning story arcs interspersed within the game-spanning mysteries.

The game is set in 1973 with Lauren Blackwell (Rosangela's Aunt) and Joey Mallone have discovered the ghosts of a shut-in mother at a construction site which used to be her old apartment building and a jazz saxophonist playing to himself on a promenade. The two embark on an adventure to discover that the two ghosts are connected and find what is really going on.

The game uses a simplified point-and-click interface that allows players to use/interact/take with a left-click or to look at objects with a right-click. Progressing through the game focuses on conversing with characters to acquire information, with less focus on using items to succeed. The game also has a notepad function which is used to ask specific questions as well as linking two clues together in order to create further clues and talking points. This is also the first game in the series that allows players to directly control Lauren's spirit guide Joey Mallone, whose abilities include being able to pass through solid walls and locked doors, verbally and physically interact with other ghosts and float above obstacles. 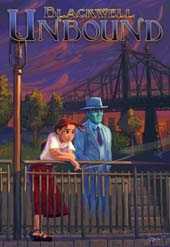