Elevator Action is a 1983 arcade game by Taito where players control Agent 17, who is attempting to steal documents in a tall building.

The player assumes the role of a spy codename: "Otto", who infiltrates buildings filled with elevators. The goal is to collect secret documents from the building, while moving from floor to floor using an increasingly complex series of elevators. Enemy agents appear from behind closed doors, and Otto must outwit them via force or evasion. Successful completion of a level involves collecting the secret documents and traversing the building from top to bottom. In the lower floors of the building, the elevator systems are so complex that some puzzle-solving skills are needed.

The arcade version's cabinet is a standard upright. The controls consist of a 4-way joystick and two buttons, one for "shoot" and the other for jumping and kicking.

An extra life is earned when player reaches 10,000 points.

Like many arcade games of this era, Elevator Action was reworked for consoles and computers, including the ZX Spectrum, Amstrad CPC, MSX, Commodore 64, NES, and the Game Boy.

A version for the Atari 2600 was being worked on, but was abandoned before completion as a result of the video game industry crash of 1983. Eventually a 90% complete prototype (missing all sound, and containing countless serious bugs and glitches including a trick that allowed the player to "fly") was circulated online, and in the end the game was actually released complete with period-appropriate Atari style packaging, in a limited run of about 200 at the Classic Games Expo 2001. 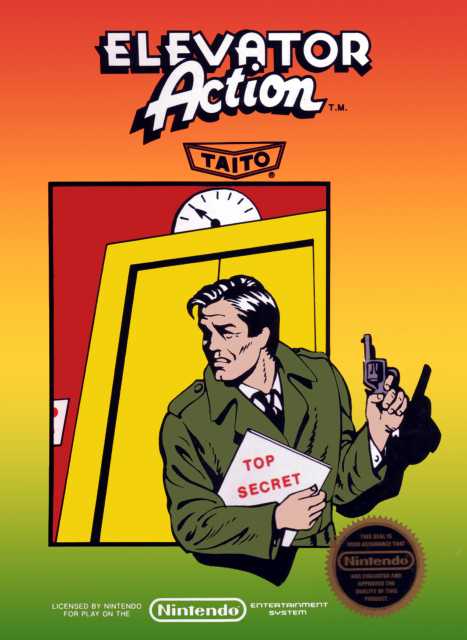