A sci-fi multi-genre action game for the NES, released in Japan as Gun-Dec. The player is a wisecracking detective attempting to uncover an alien conspiracy.

Vice: Project Doom is a sci-fi action game from Aicom featuring many different gameplay modes. The game begins with a Spy Hunter-style vehicular combat and switches to a side-scrolling action game (similar to Ninja Gaiden or Castlevania) for its first proper stage. Also like Ninja Gaiden, the game has a lot of cinematic cutscenes that appear between stages.

The plot focuses on Detective Quan Hart of the Vice Squad, who is investigating the source of a powerful new narcotic on the streets. It leads him back to the powerful B.E.D.A. Corporation, which is secretly lead by aliens who have been hiding among humans for centuries.

The game was published in Sammy in both the US and Japan. In Japan, the game is called Gun-Dec and has box art notable for using a trace of a Bruce Willis promotional shot from Die Hard. 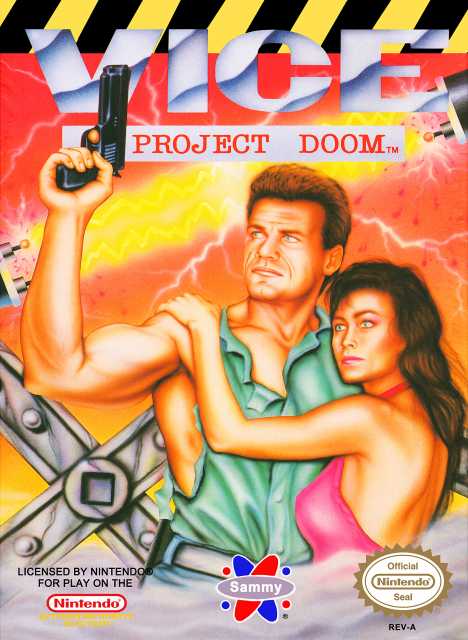