An arcade mahjong solitaire game from the studio behind some of the arcade installments of Shanghai. Rather than stacks of tiles, Soutenryuu has one long tightly-bound linear path of tiles, with tiles only matchable if they're on the same or connecting line.
PlayStation 2

Soutenryuu is a mahjong solitaire game developed by Warashi and released by Taito for arcades (using PS1-based Taito G-NET hardware) in Japan in 2000.

Developed by the studio behind Shanghai: Shoryuu Sairin (and later Shanghai: Sangoku Pai Tougi), Soutenryuu changes the traditional mahjong solitaire formula by having all tiles in a single path of straight lines, which bind together when tiles get removed (somewhat similar to Puzz Loop). Tiles can only be removed by selecting two matching ones along the path, but only if both tiles are either in the same line or in directly-connecting lines.

It was later ported to the PlayStation 2 on March 27, 2003, published by DigiCube as Soutenryuu: The Arcade. 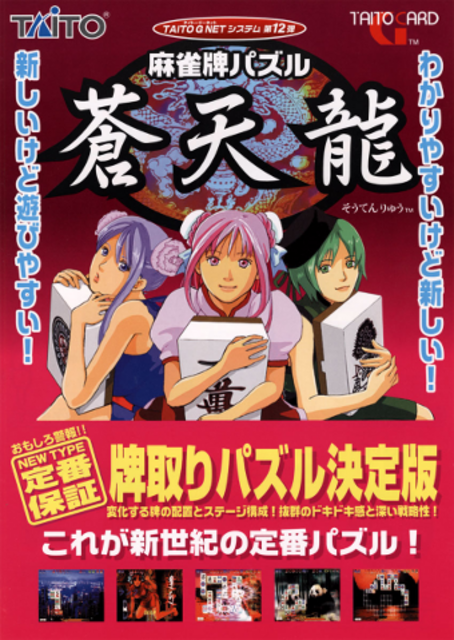