Bases Loaded allowed players to control one of twelve fictional teams in either single player which allowed up to two players, or a full season. The game featured a television style depiction where the player took the perspective of the pitcher.

Bases Loaded, released by Jaleco in Japan in 1987 and then again in the United States in 1988 was one game in a strong line-up of NES baseball sims. One of the unique aspects of the game was the "over the pitcher's shoulder" view, commonly found in televised baseball games. This allowed for a more interesting pitching/hitting interface as pitchers could now throw high and low and batters could hit high/low, inside/outside, as well. Like most sport sims of the time, Bases Loaded dosent feature any MLB licensed teams, stadiums or players. The game features 12 teams with there own strengths and weaknesses:

Some teams were well-balanced at the plate, on the mound, and in the field, while others had particularly strong aspects counterbalanced by weak characteristics. For example, Hawaii features strong hitting and a pretty good pitching staff, while Kansas has exceptional pitching and mediocre hitting.

Jersey was famous for their power hitter, Paste. Batting third, Paste had a stellar .467 batting average and 60 home runs. Based upon these statistics (the only offensive statistics to inform player ability in Bases Loaded were batting average and total home runs), he was easily the most powerful and talented hitter in the game. Paste is also featured in the non-playable demo that loops during the intro screen, where he hits a deep grand slam into the center field bleachers.

Another first for gaming was the ability to charge the mound and fight the pitcher. Only select players could do this and it was an event that was usually triggered after a player was plunked in the at-bat following their last at-bat were they hit a home run. All in all, this feature was implemented well, entertaining to watch and not overused. 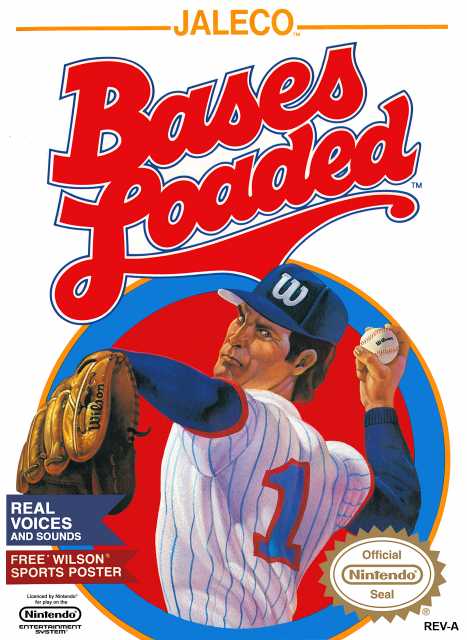