A baseball team management game for the Famicom and the second game in ASCII's long-running "Best Play" series.

Best Play Pro Yakyuu II is the second game in ASCII's series of baseball management sims to hit consoles, where the player builds an ideal team of batters, fielders, and pitchers and sets them against various CPU teams. The player is a passive observer in the game itself, though can pause the game to reassign and substitute players.

The game follows Best Play Pro Yakyuu, released on the Famicom in 1988. Like its predecessor, it was never released outside of Japan. 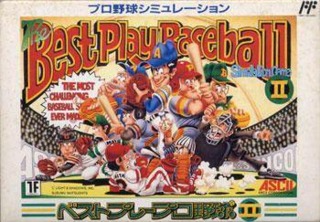