An original entry to the Tales universe, an action-RPG with a gacha system developed exclusively for mobile devices.

This game features an ensemble cast of 21 characters, split between 3 factions, each with 8 story Episodes planned to eventually tell the entire story of Luminaria. In addition, eight "Crossroad" episodes told from multiple characters' perspectives, are planned to be released after all characters have had their similarly-numbered Episode released. As of February 2022, every character has had at least one Episode released, plus one "Crossroad" episode. New episodes are being released every week.

Every Episode is presented like an episode of anime, with an opening theme at the start (「TOMOSHI BEAT」by Frederic (Arrangement) and Koji Mihara (Lyrics and Composer)) and an ending theme upon completion (「Regret」by Keina Suda), and the selected character narrating their own preview of their next episode.

On May 10, 2022, the developers released a statement stating that the game and its official website would be shut down on July 19 of the same year, and no further episodes would be released before then, except for an "Episode Final" that would focus on Hugo.

Unlike many other games with a gacha system, all characters are available to play from the start (after completing the tutorial missions as Leo), and have their own stories set in the same world that often overlap with each other. Many also have their own choice of weapon and respective fighting style. For example, a katana wielder's attacks will work differently than a bowman. Furthermore, different characters who wield the same types of weaponry may have their own unique skills.

The gacha system is used to unlock new outfits and weapons for existing characters. A super-rare 5-star outfit can even unlock a whole new powerful Mystic Arte for the character who wears it.

The people who worship the Primordial Beasts and live in harmony with nature.

The people who have extracted mana through artificial means to power advanced technology to help their nation prosper.

Independents who fight with neither side, and instead try to investigate the history of the Primordial Beasts and the world on their own.

An anime based off the main story of the game, titled Tales of Luminaria: the Fateful Crossroad, was animated by Kamikaze Douga and contained music from Go Shina. The anime was released on January 20, 2022 as a two-part ONA, with both Japanese and English dub tracks available worldwide through Crunchyroll and Funimation. 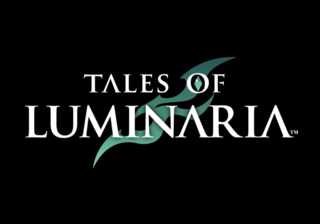