World Class Bowling is a bowling game developed and released by Incredible Technologies for arcades in 1995.

A spiritual successor to the studio's earlier bowling game Strata Bowling, World Class Bowling retains its use of trackball controls while changing the perspective from top-down to a pseudo-3D behind-the-lane perspective (similar to SNK's League Bowling).

It features an optional ticket-dispensing system (with tickets earned every 60 pts., every strikes on a Beer Frame, and every Perfect Game) and separate high-score tables for Perfect Games and 7-10 Splits.

In 1997, the game received an updated version (sometimes known as World Class Bowling Deluxe) that adds Flash Bowling rules (as an alternative to Regulation Bowling), while removing the ticket-dispensing system. Along with a standard release, this version received a release that supports connectivity with the developer's online International Tournament System (ITS), previously used for Golden Tee 3D Golf. The ITS version allows players to participate in worldwide tournaments, which are updated off-hours via a dial-up modem. 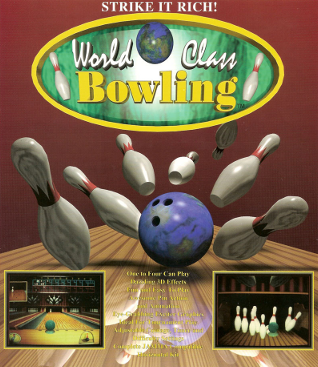