The sequel to Ultraman Club includes even more Ultraman variants and the various kaiju he fought on the TV shows in this turn-based RPG inspired by Final Fantasy.

The game is far more streamlined than most RPGs of its era: the player can only gain experience levels to become stronger, and cannot find or purchase new equipment. It also uses a password system to save progress, with the player returning to wherever they last heard a password upon the party's defeat.

The game was the first, or one of the earliest, games to be developed by eccentric game designer and musician Kenji Eno. He would find later success with the D franchise. 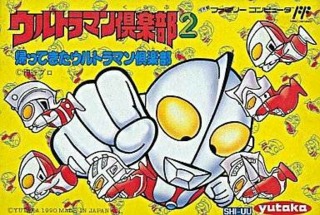