Pajama Sam: No Need to Hide When It’s Dark Outside

When Sam can't sleep because of the his terrible fear of Darkness he dons his Pajama Sam costume and ventures forth to vanquish Darkness!

Pajama Sam: No Need to Hide When it's Dark Outside is a children's adventure game developed by Humongous Entertainment. Released on October 4, 1996, Pajama Sam received numerous awards and for the time was a hit among the younger audience. Pajama Sam featured a kid friendly version of the SCUMM engine that made the game very accessible for younger players.

Sam, a life long fan of Pajama Man scared to sleep because of the monster in his closet. He decides to vanquish this foe and after donning his mask he becomes Pajama Sam! Sam ventures into the closet with his trusty flashlight, collectable Pajama Man lunchbox, and his mask. Unfortunately for Sam upon entering his closet he falls into the Land of Darkness. Seemingly unfazed he sets off to Darkness' house but before he can reach the dwelling of his dreaded foe he is captured by a host of trees who quickly relieve him of his lunchbox, mask, and flashlight. After escaping their trap Sam finds that without his trusty items he can in no way vanquish Darkness. So Sam decides to set off into the Land of Darkness and retrieve his equipment so that he may finish his quest.

Pajama Sam, like many Humongous Entertainment games, changes everytime it is played. While the objective remains the same, to find your superhero gear and vanquish Darkness, the location of the items you need to collect changes. This means that in every game different items will need to be collected, different people or things may need to be interacted with, and new characters that wouldn't otherwise make appearance are shown.

Pajama Sam featured a sidequest that involved picking up all of Sam's lost socks. If all twenty are collected during the game the player is treated to slightly different dialogue at the end of the game.

Cheese and Crackers is an aptly named version of Tic Tac Toe played with cheese and crackers. Run by a toaster in the forest near the river the game has no real significance to the storyline. Three different boards are available for play ranging from the basic three by three board to two significantly larger boards. If Sam plays cheese and crackers during the game the dialogue during the ending sequence changes slightly.

A Wii port, along with Freddi Fish and Spy Fox, was announced by Humongous in March of 2008. It was released the same year on August 26th. 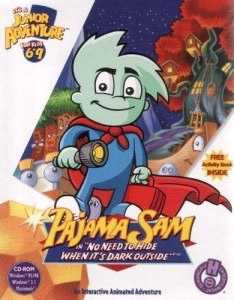