A puzzle game from dB Soft for various home systems. It was the first dB Soft game on the Famicom. The player controls a mole-like creature named Flappy and must push a blue rock onto its platform on each stage.

Flappy was originally released on Japanese home computer the Sharp X1 in 1983. It was later released on many other home systems around the same time. In 1985, it was ported to the MSX PC line and the Famicom, becoming dB-Soft's first release for Nintendo's fledgling system. The Famicom version would also be rereleased years later on the Wii Shop's Virtual Console.

Players, as Flappy, must push a blue-colored boulder onto a similarly colored platform using the level design and other, brown-colored boulders as support. Flappy can push boulders and even destroy the regular variants, but eliminating them can often mean being unable to complete a stage. As well as figuring out the solution, Flappy must avoid enemies throughout the stage, though they can be temporarily stunned by picking up and throwing special mushrooms lying around and also squished permanently by dropping boulders on them. Of course, Flappy can also be killed if a boulder falls on his head or comes into contact with the enemies. The player has a set number of lives and once they've all gone, the game is over. 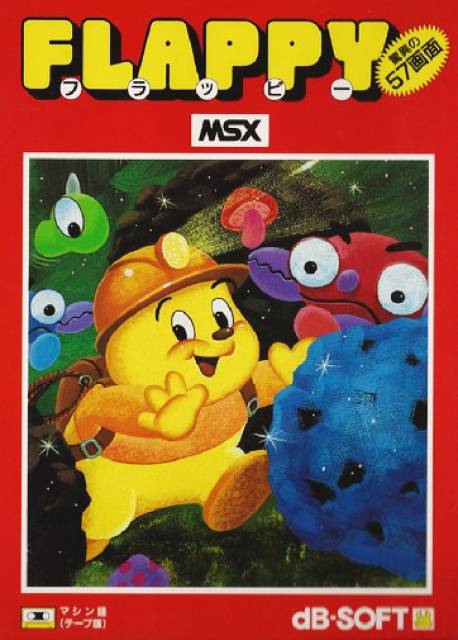