The sequel to a game that probably doesn't even exist.

Yeah Yeah Beebiss II is a retro-styled action-platformer for PC and Nintendo Switch, with limited physical releases for the NES and the Sega Dreamcast. A limited download version for the Evercade VS was released for free to play during the month of Novermber 2022 before being added to the Indie Heroes Collection 2 cartridge. Developed by Mega Cat Studios with YouTuber John Riggs (as Rigg'd Games), the game is an homage to the long-standing mystery of Yeah Yeah Beebiss I, an alleged NES game mentioned only in magazine ads.

Yeah Yeah Beebiss II is very loosely based on Rai Rai Kyonshis: Baby Kyonshi no Amida Daibōken, a Japan-only game that's been speculated to be the true identity of Yeah Yeah Beebiss I. In both games, players control jiang shi (kyonshi in Japanese), hopping vampire-like creatures from Chinese folklore.

In 1989, several ads were printed in US video game magazines for Play It Again, a mail-order business selling used games, which listed an NES game for sale called "Yeah Yeah Beebiss I." Ads for Funco, another used game company that went on to launch the FuncoLand chain of stores, listed the more concisely-titled "Yeah Beebiss I" for sale later that year. The ads gave no information about the game, and no further evidence of any game with such a title has ever been found, despite much investigation by lost media enthusiasts (summarized on this page of the Lost Media Wiki).

The prevailing theory is that Play It Again invented the name "Yeah Yeah Beebiss I" and listed it as a trap to expose other companies who might copy their listings. Such traps have been printed in encyclopedias, maps, trivia books and other frequently-copied material since the 19th century. Neil Levin, who once ran a used game business with Play It Again founder Bob Schwartz, told a user of the Lost Media Wiki that Play It Again and its rivals used this tactic often.

But a competing theory holds that Yeah Yeah Beebiss I was an imported Japan-only game, listed under a badly mangled version of its title – namely, Rai Rai Kyonshis: Baby Kyonshi no Amida Daibōken, released in 1989 as part of the Family Trainer series by Bandai. The "Baby" in its title is written phonetically, using Japanese characters that are pronounced "beh-bee," and some speculate this was misinterpreted as "Beebiss." It's also been suggested that "Rai Rai" could have somehow morphed into "Yeah Yeah," but the phrase is so obscure in Japanese that even its significance in the original title is unclear. Just as murky is the potential origin of the "I" – while this could be read as a Roman numeral, there is seemingly no reason to number a newly-released game that is not a sequel. Usually this part of the title is explained as a mistranscribed exclamation point.

In any case, the Rai Rai Kyonshis theory gained enough traction to inspire Yeah Yeah Beebiss II as a game featuring jiang shi protagonists, but it has little else in common with Rai Rai Kyonshis, bearing more resemblance to early action-platformers like Ninja JaJaMaru-kun. 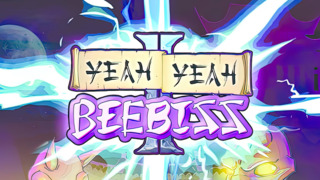