Pac-Land is a side-scrolling platformer in the Pac-Man franchise. It was one of the earliest side-scrolling games, released prior to Super Mario Bros.

Pac-Land was created by Namco and released into arcades in 1984. It was also ported to many consoles and in 1996 was included in Namco Museum Vol 4 for the PlayStation. The arcade game used the Namco Pac-Land system board, which was also used in Dragon Buster, Metro-Cross, Baraduke and Sky Kid. Pac-Land also featured parallax scrolling for some of its backgrounds, which was not commonplace until the 16-bit era.

The game centers around getting a fairy to the end of the stage and eventually back to the Queen Fairy in Fairyland. Since there were the five ghosts (Pinky, Inky, Blinky, Clyde and Sue) that kept chasing Pac-Man, the fairy was tucked away safely under the hat that Pac-Man was wearing. Together they venture right and left, completing levels and avoiding dangerous obstacles like quicksand, water and the ghosts themselves.

For bonus points, the player can collect cherries and other items. Also, there is an power pellet on each stage that Pac-Man can collect. That turns the ghosts blue. Then the ghost consuming can begin...

When the player has made it to the end of the final stage, they are awarded with a pair of magical boots. Those are helpful, as they allow continuous jumps in the air as Pac-Man returns home. Once he is home, he is greeted by Ms. Pac-Man and Baby Pac-Man. If playing the US release, Pac-Man is also greeted by Sourpuss and Chomp-Chomp (from the Pac-Man cartoon).

Then, if the player chooses, Pac-Man starts another journey with the same objective but with increased difficulty. 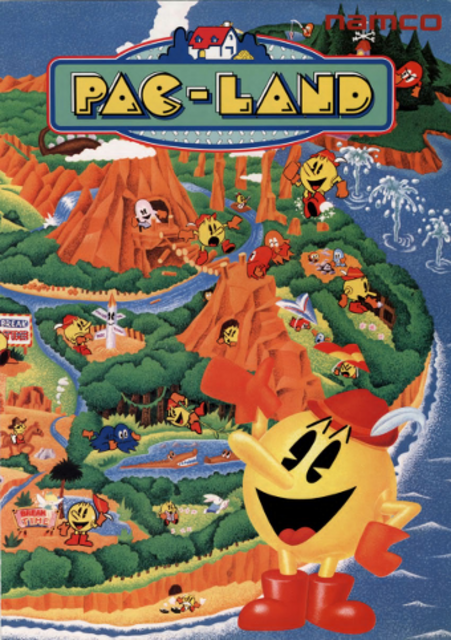