A top-down fantasy action Arcade game from the 80s in which up to four players fended off hordes of enemies while navigating treacherous mazes. Its difficulty is legendary; players can still hear the cry "Wizard needs food, badly!" in their nightmares.

Gauntlet is a classic "dungeon crawling" game developed by Atari Games (which later became Tengen). Up to four players can take control of four different characters and fight their way through a dungeon of bad guys and loot treasure. Gauntlet was the first arcade cabinet to feature four player cooperative gameplay and it caused a sensation in the Arcade when it was released in 1985.

The character classes in Gauntlet are the: Thor the Warrior, Merlin the Wizard, Thyra the Valkyrie, or Questor the Elf whose colors are red, yellow, blue and green, respectively.

Each character has its own abilities. Thor the Warrior, the slowest character, deals the most damage and is also the most effective character at close range. Merlin the Wizard is a fast character who is not good at close combat but has the most powerful magic, which is activated by using a potion found in the dungeon. Questor the Elf is the fastest character but is weak at close range. His long range shots make him a good scout (the Elf player often irritates other players since his extra speed allows him to steal all the treasure before anyone else can get a look-in!). Finally, Thyra the Valkyrie is the all-rounder who neither excels nor fails in any given department.

The objective of Gauntlet is to progress through a massive dungeon with hundreds of levels. On each level the player(s) must reach the exit in order to advance to the next level. However the dungeon's denizens are there to make reaching that exit a tough task. Dungeons are populated by all manner of nasties including: Ghosts, Grunts, Demons, Lobbers and, of course, Death himself! Enemies in Gauntlet commonly spawn from generators and will do so inexorably until the generators are destroyed. Other features of the dungeon include locked doors, secret rooms, and teleporters.

Each hero has a numerical value representing their health on the the screen. This number steadily ticks down to zero even when the hero is not taking any damage. Since vast hordes of enemies are all competing for a chunk of the heroes health, it is not an easy task to survive in Gauntlet. One remedy for this rapidly diminishing health for the arcade version is to drop more coins into the slot to buy more health points. Food pick-ups are also scattered around the dungeon which boost the health of whoever collects them. Unfortunately, food only gives the hero another 100 points of health, which doesn't last long.

To make life a little easier for the heroes there are power-ups which can be collected; these include temporary invisibility, an armor boost, and extra shot speed or power. Since all characters occupy the same game screen, a good deal of cooperation is required in order for a group of players to successfully navigate the levels. A good team will fairly distribute the bonuses to the most suitable hero, i.e. "let the Wizard have the potions". A bad Elf player can spoil the groups chances by snatching everything!

One of the most memorable features of Gauntlet is the audio. The game has an announcer who, in all his 8-bit glory, declaims important messages such as "Wizard shot the food!" or "Warrior needs food badly!" At the time, it was impressive that a game had audible speech in 1985, which was novel.

Gauntlet was originally a copy, with some upgrades, of a game by John Palevich, who contributed his dungeon crawler to Atari through the Atari Program eXchange. Palevich later sued for compensation, or at least name recognition in the credits of the Gauntlet arcade games. Atari was said to have recognized Palevich's role in the creation of Gauntlet, but as the arcade machines were already made, they maintained that adding Palevich's name would have been prohibitively expensive. Palevich was later given token compensation from Atari in recognition of his unwitting role in the creation of this game. 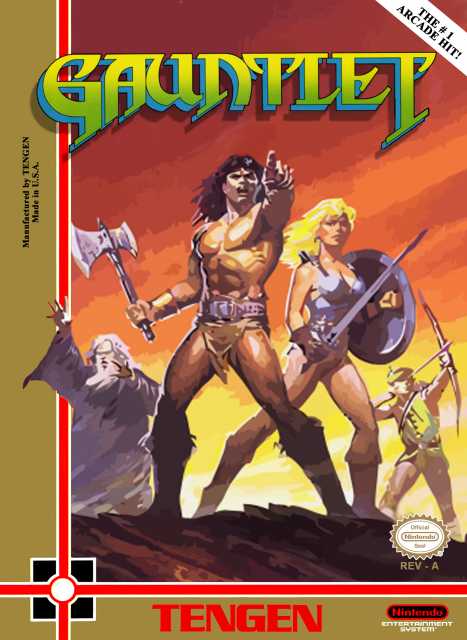