An action RPG that resembles Zelda II with ninjas. Released exclusively on the Japanese Famicom.

Kage Ookami Densetsu ("Legend of the Shadow Wolf") is an action-RPG for the Nintendo Famicom that was released in May of 1990.

The goal of the game is to defeat a demon lord and avenge the protagonist's father, and the hero is followed by two of his friends that the player can switch between when taking on random encounters. These random encounters occur while travelling across the world map and take the player to a side-scrolling zone where they must defeat fast-moving ninja opponents and other monsters through a combination of slashes and jumps. There is also magic, but it takes time to cast and leaves the player vulnerable. 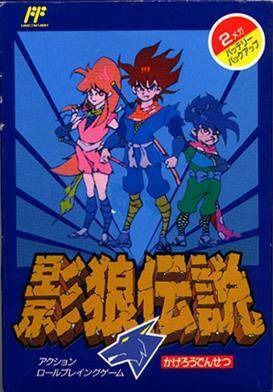