An early-80's multi-game arcade machine by Merit and the earliest known game of its type, designed for use in bars and taverns. Uses a five-button setup similar to other video poker arcade games and includes 4-6 gambling games.

Pit Boss (also known as The Pit Boss) is a multi-game arcade machine developed and released by Merit Industries for arcades in 1983.

The first known machine of its type, Pit Boss was developed for use in bars and taverns (primarily with its countertop cabinet) and includes multiple games that simulate gambling. All games make use of a five-button control setup similar to other video poker games.

Unlike most machines of its type at the time, Pit Boss does not allow players to actually gamble with their money. Instead, players start each credit with a certain amount of score, which they can use to bet in the game for a limited amount of time (up to 3-5 rounds, depending on the game selected) in an attempt to reach the high score list (the "Heavy Hitter's Club"). Similar to most betting games, players can also gamble their winnings on a game of Hi-Lo.

It later received multiple sequels, each of which include several non-gambling games (such as trivia, card, and puzzle games). It would later spawn the Megatouch series of touch-based multi-game machines.

Depending on the game version, likely due to regional regulation, the machine includes either 4 or 6 games from the below list: 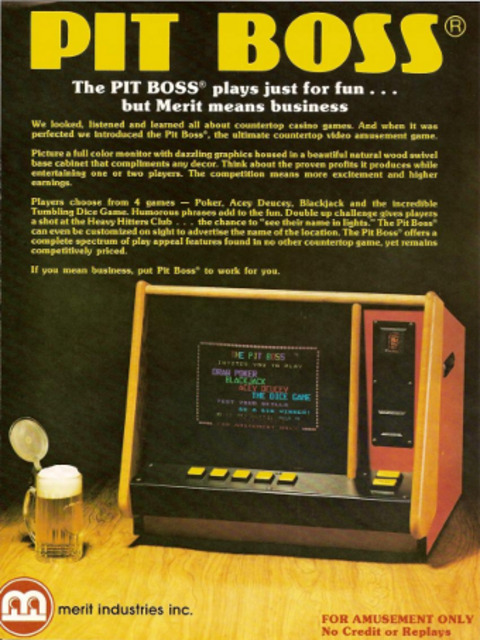