An RPG that takes place in the land of Elemen, where the sinister Galneon is waging a war against Card Masters (powerful wizards and warriors) to resurrect an ancient, evil empress named Rimsala. The player assumes the role of Rooks, the last surviving Card Master and would-be hero of Elemen.

Arcana, or Card Master: Seal of Rimsalia in Japan, is a SNES RPG and one of very few that is a first-person dungeon crawler like Might and Magic or Shining in the Darkness, rather than a top-down game in the vein of Final Fantasy or Dragon Quest. The player is able to summon spirit helpers to assist him in the game's turn-based encounters, as well as various recruitable characters, and can return to a hub town to replenish their supplies and rest.

Everyone featured in the game, including NPCs and monsters, are depicted as cards that feature their stats and appearance. The card presentation is entirely superficial, as the game doesn't really employ any card-based systems. 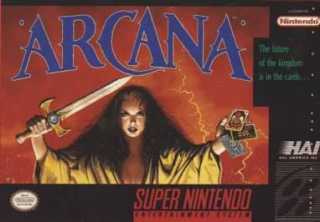