A title that takes full advantage of the pack-in SNES mouse accessory, allowing the player to paint pictures, compose music, and play mini-games.

Mario Paint is a creative software suite developed by Nintendo R&D1 for the SNES. Its primary applications are a drawing program, a MIDI sequencer and support for simple animated sequences. It also contains a fly-swatting minigame and a unique interactive title screen featuring Mario. Mario Paint was packaged in an oversized box to accommodate the SNES Mouse peripheral and plastic mouse pad that were included with the game.

The Drawing Board is the game's drawing program. Here the player is given tools such as pencils, fills and stamps to draw and color whatever they wish. When on the drawing board, click the Text Stamp Icon to open up text. Mario Paint has upper and lower case English letters, numbers, and three types of Japanese characters: Hiragana, Katakana and Kanji.

This mode allows players to place various icons representing sounds on a note-chart to create music. The sounds vary from from traditional twings and twangs, to the beeps of a Game Boy and Yoshi sound effects.

Mario Paint offers a simplistic tool to create animated sequences. Using a limited number of frames, the player can draw a sequence of images that can then be played as an animated short.

In the game's coloring book, there is a collection of pre-drawn images featuring Nintendo characters and other items. In this mode, the player is free to color the images using fill and drawing tools.

Gnat Attack is a training game. The mouse is used to control a flyswatter, and the player must swat incoming insects before they sting the player's hand. Hands representing extra lives can be collected over the course of play. The goal is to swat 100 insects to reach King Watinga. When King Watinga is defeated, hands will appear on the screen and applaud the player. 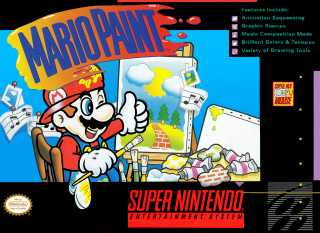