A Netflix exclusive release from Devolver Digital's Reigns franchise with an expanded scope.

As the name implies, Reigns: Three Kingdoms marries its swiping gameplay with the classic Chinese tales of the Three Kingdoms. As such, the game will include notable characters from that era, such as Lu Bu. Like the previous games in the series, the story is driven by a two-choice system that fluctuates four core values on the top of the screen. When presented with a choice, the card needs to be swiped either left or right, which mimicks the motion of dating apps like Tinder.

Aside from the story, Reigns: Three Kingdoms also has a role-playing (RPG) system. Certain choices can lead to missions, which are present on a map of China that gets divided into several regions. Travelling to those regions will open up different paths in the story.

Combat makes up a second RPG branch and uses the card system to build a deck of warriors. In a turn-based system, each card rotates to the front of the battlefield to attack. Each card has a value for attack and health. Some cards have additional effects. If a card is defeated, it will leave an open spot in the circle of cards, where the player's health points are. The first to deplete the opponent's health is the victor. Additional fighters can be recruited by meeting them in the story.

As with other Reigns games, the four core values on top of the screen can lead to different outcomes by either losing all value or stacking too much into a value. Usually, mismanagement of these values will end the game. In Reigns: Three Kingdoms, these endings boot the player back to a simulation set in the future, where an avatar with a headset will usher you back into the past era, akin to the Animus concept in Assassin's Creed games.

At the time of its release, Reigns: Three Kingdoms was an exclusive on mobiles, requiring a subscription to the Netflix streaming service. It is only possible to reach the games section of Netflix through its dedicated app, not the web version. 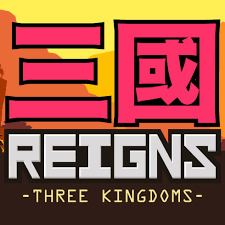