Developed by Looking Glass Studios and released in 1999, this cyberpunk first-person shooter with RPG elements established new standards for storytelling and gameplay.

System Shock 2 is the sequel to the 1994 first-person shooter/RPG hybrid System Shock. Set in the early twenty-second century, players assume the role of a nameless soldier serving aboard the military space-faring vessel UNN Rickenbacker during its defensive escort for the maiden voyage of humanity's first faster-than-light starship, the Von Braun. The campaign begins as the soldier is awakened from cryogenic stasis with no memory of the last several weeks, only to discover the Von Braun derelict and overrun by a host of hostile mutant creatures who refer to themselves collectively as "The Many".

Over the course of the game, the soldier uncovers the events leading to the catastrophe by battling his way through both ships and examining clues left behind by the crew, such as audio logs. In a mid-game plot twist, players also witness the resurrection of the original System Shock's primary antagonist, the malevolent artificial intelligence known as SHODAN.

The main story begins in 2114, forty-two years after the events of the original System Shock. After the protagonist, Soldier G65434-2, joins the United National Nominate, he is assigned to the Rickenbacker, a military spacecraft. This ship is appointed to escort the maiden-voyage of the Von Braun, an experimental starship capable of faster-than-light space travel.

A couple of months into the journey, the ships respond to a distress signal originating from the planet Tau Ceti V. A rescue team is deployed to the surface of the planet, where they discover strange eggs throughout the entire facility and nearby area. The eggs suddenly infect the rescue team and integrate them into an alien communion that calls itself The Many. Upon the rescue team's return, the infestation takes over both ships.

Soldier G65434-2 awakens in a cryo-tube in the medical wing of the Von Braun with amnesia due to a computer malfunction. He is immediately contacted by another survivor, Dr. Janice Polito, who guides the soldier to safety seconds before the medical wing depressurizes. Dr Polito implores the soldier to meet with her on Deck 4. As he makes his way to his objective, the soldier battles the infected crew members; all the while, The Many communicates telepathically with the soldier, inciting him to join their collective.

After the soldier restarts the Rickenbacker's engine core, incinerating everything in the elevator shaft, he reaches Deck 4 and discovers that Dr. Polito has been dead for some time. He is confronted by SHODAN, the rogue artificial intelligence that caused the devastation on Citadel Station in the previous game. She reveals that she has been posing as Dr. Polito to gain his trust, and is solely responsible for creating The Many. They are the results of bio-engineering experiments on the denizens of Citadel Station. Forty-two years earlier, an unnamed hacker ejected the grove that contained both SHODAN and her experiments into space to prevent them from contaminating Earth. When the grove landed on Tau Ceti V, SHODAN was forced into hibernation. This allowed The Many to grow beyond her control. SHODAN subsequently issues an ultimatum: The soldier must help her destroy her creations, or die.

Soldier G65434-2 tries to regain control of the main computers, but ultimately fails. SHODAN informs him that destroying the Von Braun is their only option, but he must first transfer SHODAN's consciousness to the Rickenbacker. While en route, the soldier briefly finds two survivors, Tommy Suarez and Rebecca Siddons, who flee the ship on a working escape pod.

When the transfer is complete, the soldier travels to the Rickenbacker and learns that both ships have been infected by The Many's source: a giant mass of organic tissue. The soldier enters its mass and destroys the core from within, stopping the spread of the infection. SHODAN congratulates the protagonist and informs him of its original intentions: to merge physical reality with cyberspace by subverting the reality-altering mechanics of the Von Braun's FTL drive. The soldier subsequently confronts SHODAN in cyberspace and defeats her.

The final scene of the game shows Tommy and Rebecca receiving a message from the Von Braun. Tommy answers, telling the soldier that they will return for him but Rebecca isn't feeling well. She is heard speaking in the same voice as SHODAN.

Like its predecessor, System Shock 2 combines the immersive perspective of a first-person shooter with extensive gameplay elements seen primarily in role-playing games. At the start of the game, players can customize their character's skill set through a series of military career missions. A player's chosen attributes and skills directly influence their character's effectiveness in combat, as well as their ability to perform various non-violent actions such as hacking.

Throughout the game, players have opportunities to guide their character’s specialization by spending "cybernetic modules" at special kiosks known as "upgrade units". Characters can progress in their combat skills, including Standard, Heavy, Energy and Exotic weapons. They can increase their technical prowess, including hacking, repairing, weapon modifications and research. Alternatively, they may learn increasingly powerful psionic abilities.

System Shock 2's gameplay is open-ended, and characters with different specialties may find different ways around obstacles. A Marine trained in combat skills might fight past several enemies to reach an important switch, while an OSA agent with psionic abilities might hide himself from his enemies and simply walk past them. A UNN naval officer could use his technical skills to hack into a nearby gun turret and let it destroy the enemy instead.

As in most RPGs, players will discover a wide variety of equippable or consumable items over the course of the game. Items require inventory slots to carry, and the player's total number of slots depends on their character's Strength value.

With the exception of the Wrench, every weapon in the game has an associated skill prerequisite. Certain weapons may also require a certain level of basic character attributes (Strength, Agility, etc.) to equip. Most of the game's ranged weapons can be loaded with different kinds of ammunition, some of which may be more effective against certain enemy types.

While melee weapons in System Shock 2 cannot be broken, all ranged weapons are subject to durability damage and will eventually jam after a certain number of rounds have been fired, effectively disabling the weapon until it is repaired.

With the exception of the Hazard Suit, characters' attributes (Strength, Agility, etc.) must meet certain prerequisites in order to equip protective gear.

Special "metabolic booster" devices known as Implants can be equipped to the player's cyber-rig in order to grant better stats or skills. Implants draw power from an internal battery pack, which must be periodically recharged to maintain their functionality.

In addition to equipment, players can carry consumable items that offer additional support, such as healing or free upgrades.

Using a software item instantly installs it to the player's cyber-rig. Each piece of software is available in three tiers of effectiveness; level 1 boosts the associated skill by 10%, level 2 by 20%, and level 3 by 30%. Higher levels of the same software will automatically overwrite previous versions when used.

Players can research certain annelid artifacts to gain various perks or unlock new items and equipment. However, research requires basic chemical elements, which can be found in various Chemical Storerooms located throughout the Von Braun and the Rickenbacker. Most researchable objects require more than one chemical to research, as well as certain levels of the Research skill.

System Shock 2 was noted for the original aspects of its design, including the usage of crew member audio logs as a narrative device. These voice recordings tell the story of what happened aboard the Von Braun and, in some cases, document the horrific transformation of the crew into mindless, savage agents of The Many. This method of storytelling allowed the story to flow at the pace of the player's progress, instead of sweeping the player along by force. The game is also noted for its atmosphere and tension, and to this day it ranks on many critics' lists as one of the scariest games ever produced.

Despite the game's critical acclaim, piracy and a lack of marketing resulted in lackluster sales, and System Shock 2 is known today more as a cult hit than a commercial success.

Although it wasn't a huge commercial hit, a lot of game mechanics and ideas were refined and used many years later in System Shock 2's critically and commercially acclaimed spiritual successor, Bioshock, including the use of audio logs, plasmids in place of cybernetic upgrades, and a similar mid-game plot twist. Deus Ex, another well received game whose development was lead by System Shock franchise creator Warren Spector, also used many of the ideas of it's predecessor, most notably cybernetic augmentations and the integration of RPG elements with FPS gameplay.

GLaDOS , the main villain of Portal is often considered to be an homage to SHODAN, as both are malevolent female AIs who goad and taunt the player as they progress throughout the game.

Following the acquisition of rights by Night Dive Studios, a sequel to System Shock 2 is now in development. System Shock 3 is being developed by OtherSide Entertainment, a studio populated by an assortment of developers who worked on System Shock 2 as part of Looking Glass Studios.

Although many years have passed since its release, System Shock 2 still has many devoted fans and modding community. The most known mods are Rebirth, which replaces some of the game's original NPC 3D assets with new, fan made, high-resolution models, and SHTUP, which updates the original textures of the game with newer high-res versions. The ability to utilize these complex, high resolution assets is a testament to the versatility of the Dark Engine, which SS2 and the original Thief were built on. The community is also responsible for high number of fixes and tweaks, which help to run SS2 on newer operating systems and video cards. The main "base of operations" for the community is Looking Glass Studios' forum, even though the company itself ceased to exist on the 24th of may, 2000.

On February 13th 2013, it was announced that the System Shock rights and trademark (notoriously caught in a complicated legal triangle for many years) had finally been secured by Stephen Kick of Night Dive Studios who approached GOG with an aim to releasing the title on the popular digital distribution service, with a later Steam release likely, thus marking the first time in many years that the game can be bought legitimately without the need for second-hand copies or legally dubious downloads. As is customary for titles released through GOG, the game has received bug-fixing polishes and has been adapted to run natively on modern versions of Windows with little set-up required on the customer's behalf.

As of May 11th, 2013, System Shock 2 is now available on Steam with better compatibility to make it work on the latest operating systems while still allowing user-made modifications to be applied. It also contains additional material such as the game's soundtrack, maps of the Von Braun, and the original pitch document for the game.

The music score for System Shock 2 was composed by Josh Randall and Ramin Djawadi. 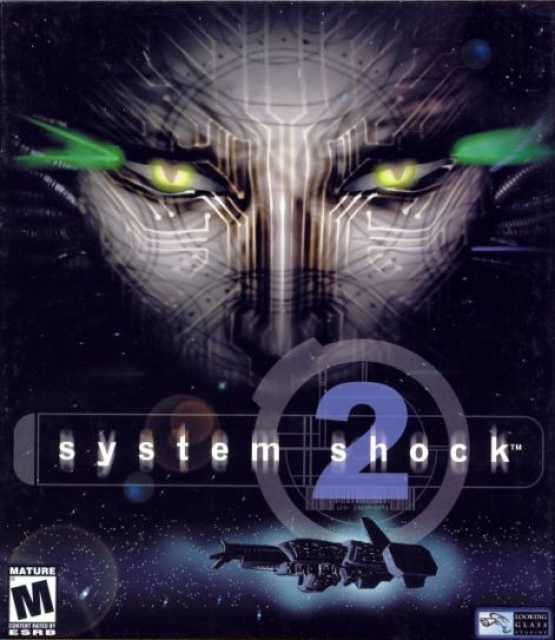