The Adventures of Cookie & Cream is a cooperative puzzle platformer where two rabbits must overcome obstacles in order to restore the world's moon.
PlayStation 2 Nintendo DS PlayStation Network (PS3)

The Adventures of Cookie and Cream is the story of two rabbits named Cookie and Cream who have to work together to get through a maze of various types. The game can be played by one person handling both characters, but can also be played as a two person cooperative game. The two characters must get through a split track, Cookie on one side and Cream on the other, in a limited amount of time. The characters have to work together to move obstacles out of each others paths, avoid attackers, and can gain extra time along the way.

While wandering home on the eve of the canceled Moon Festival, the rabbits Cookie & Cream come across a rooster who informs them that the moon has run away and if no one can find it, then the moon festival will never happen again. The two rabbits decide that it's up to them to restore order, and impressed by their bravery, the rooster grants Cookie and Cream hats to inspire courage - Cookie gets a flower-pot and Cream gets an umbrella.

Cookie also carries a guitar on his back and Cream has a pair of maracas strapped to her back as well.

The game is laid out in a very obvious way - the screen is split in two, with each rabbit having access to their own side but (usually) not the other. Each rabbit is controlled separately, so on a Dual Shock controller players use one stick per rabbit and two shoulder buttons for each as well, one for jumping and one for using objects.

The game also spawns flying enemies if you let one rabbit stand still for too long, so even if you're busy accessing a series of switches on one side, you have to keep the other rabbit moving in order to stave off certain death in the form of your level timer plummeting to zero.

Each rabbit can perform double jumps, and the use button has a variety of purposes, from grabbing switches to levers and even hanging from objects. The game throws up a huge variety of puzzles to solve, and usually require you to navigate obstacles on one side in order to pull a switch to move a platform in order to allow the other rabbit to proceed. Later levels allow you to cross the center line and pilot rowboats together, which can be tests of coordination if you're playing with two people.

Each world is capped by a large boss encounter, where (usually) one rabbit is in the arena with the boss and the other rabbit must avoid projectiles and pull switches in order to reveal the boss's weak points. At that point it's up to the other player to step in and attack the weak points for massive damage.

The Adventures of Cookie & Cream also features a robust competitive multiplayer mode, where up to four players can fight in arenas while trying to collect the greatest amount of treasure, although it requires a multi-tap in order to do so. 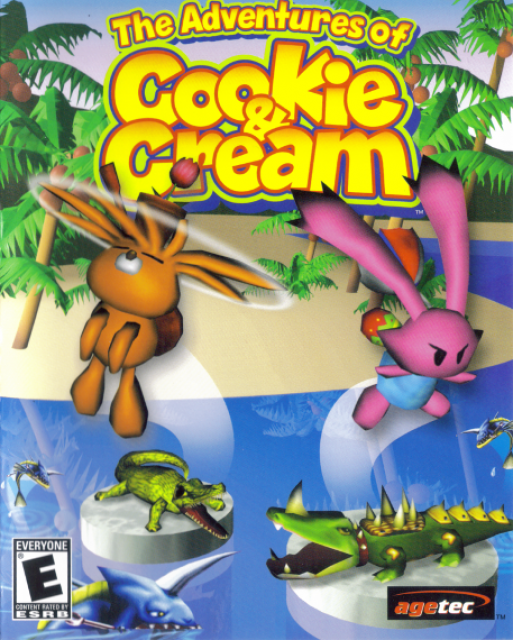